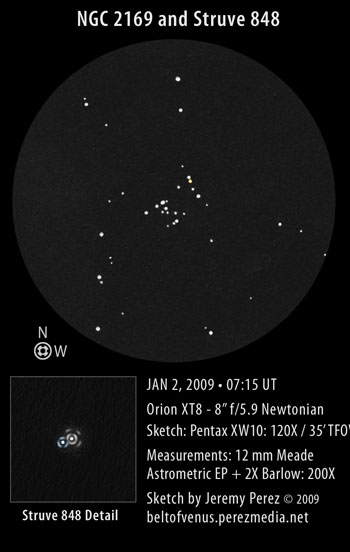 So many old sketches, so little time–this one is over a year old.

NGC 2169 really did look like an upside-down, angular #37. I plotted 19 stars in the immediate vicinity of the cluster, which appeared to be about 4 x 5 arc minutes in size. One golden-yellow star glimmered in the number 7 on the northwest side of the cluster.

Several doubles marked the field, but one in particular drew me in. The brightest star in the cluster, on the northern corner of the number 3 appeared elongated at 120X. I inserted the 2X barlow and found that it was indeed a close double. The primary appeared white with a dull blue secondary. I broke out the astrometric eyepiece and measured a PA of 112 degrees and estimated a separation of 1.5 arc seconds based on the diffraction pattern.

After coming inside, I headed over to Vizier and found the identity of the double as Struve 848. The star positions I sketched in the cluster could use some help, as seen in the DSS comparison below. Perhaps another time! 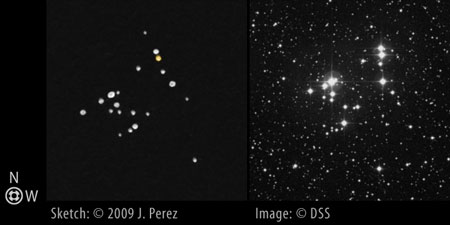