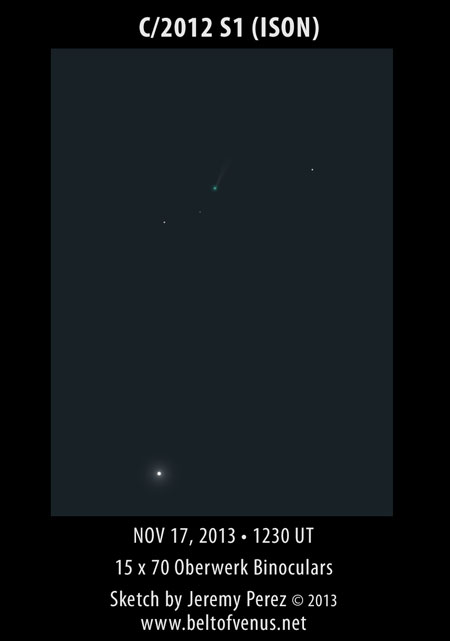 I had my first view of ISON this morning. I woke up at 5am and the sky looked clear out my north-facing window. So I threw something on, rummaged for the binoculars and headed outside…where I saw fast moving clouds all over the east horizon. Beside that mess, the comet would also be located right over the blazing dock lights at the FedEx depot. So I jumped in the car and drove east. My first spot, on a hill along Rt. 66 by the BNSF tracks still presented the gift of non-stop clouds over the comet’s location. They were rolling along in this typical Flagstaff orographic pattern where they haul off at warp speeds & you think a big batch is quickly moving out of the way, only for another huge new clump to materialize in the same spot..over and over again. But it looked it was consistently clearer just a bit further east. So I drove on and got to a spot near the Rt. 66/I-40/Walnut Canyon intersection that finally had some clearing in the sky near Spica.

The comet was a pretty quick find when there weren’t clouds squatting on top of it. The coma sported a soft aqua color and a short, maybe 15 arc minute long tail. Approaching twilight, moonlight, haze and intermittent clouds–the comet was packing a decent punch to kick through that mess. I didn’t attempt to estimate magnitude. Degree of condensation was around 3 from the binocular perspective. I need to see if I can squeak in a telescopic observation in the next couple days.