Move mouse over sketch above to see how the view changed when the polarizing filter was rotated to the correct angle.
Click image for larger version.

This easily overlooked deep sky object is tucked away above the eastern wing of Cygnus. It can be found just north of a line between epsilon and tau Cygni, about 60% of the way from epsilon to tau. It lies along the southern edge of a half-degree-wide, right-angled trapezoid composed of 8th magnitude stars. 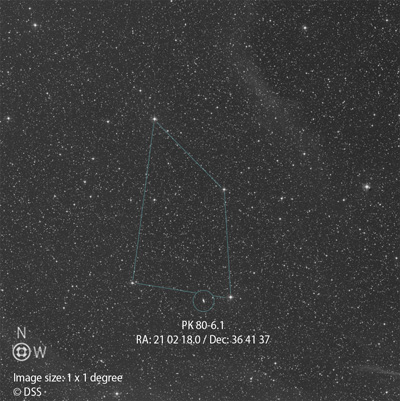 PK 80-6.1 is classified as a proto-planetary nebula. Although nicknamed the Egg Nebula, it looks like no egg I’ve ever seen…unless maybe we’re talking about a fried egg where the yolk is broken and spilling out on one side. At low power (38X), it appears as a faint star with just a hint of elongation. Bumping magnification to 120X reveals what appears to be a fuzzy double star with a brighter northern component. Observing at 240X made it easier to separate the two and note elongation particularly in the northern lobe. There appeared to be a faint shell of haze around both sides and it was tilted at a PA of about 10° (north-northeast).

Although the UltraBlock filter was useless here, there was something else particularly interesting about the nebula’s light: it is strongly polarized. I was able to place my camera’s polarizing filter in front of the eyepiece to experiment with the effect. When the filter is rotated to the correct angle, the nebula dims noticeably. The dimming was repeatable at the same angle. I’ve tried to demonstrate it in the rollover action on the sketch above.

Several sources list this object as 13.5 Magnitude. I didn’t think it was that faint. Checking Brian Skiff’s Catalogue of Stellar Spectral Classifications (Skiff, 2010) shows a vMag of 11.5, from the following sources:

So I’m listing 11.5 vMag in the object data below.

I did not estimate its size at the eyepiece, but SIMBAD lists 23 x 34 arc seconds. This appears to leave out the the antennae-like ansae visible photographically. By measuring from the POSS2 Blue plate and including those structures, the 34 arc seconds increases to 46…for whatever that’s worth.

Steve Gottlieb has granted permission for me to post his comments on the Egg Nebula below. Be sure to visit his website at Adventures in Deep Space. And don’t miss 7500+ NGC/IC Visual Descriptions, NGC/IC Project. Thanks Steve!

The Egg Nebula has an interesting discovery history going back to Fritz Zwicky, who found it on the POSS and catalogued the two components as a “pair of blue fuzzy oval compacts” in his 1971 “Catalogue of Selected Compact Galaxies and Post-Eruptive Galaxies” with the designation IV Zw 67. The description includes the two components —

This is the source of the faint magnitudes (~14) often given for the Egg Nebula. The V magnitude is probably closer to 11.5-12.

Following Zwicky, the 1973 Uppsala General Catalogue of Galaxies (UGC) included this object, so it also has the designation UGC 11668 with the description “Pair of compacts, contact”, and repeats the magnitudes that Zwicky estimated (14.0 + 15.5).

There was even a journal article in 1974 titled “Spectroscopic study of some compact galaxies” (1974A&A….33..113C) that determined an erroneous recessional velocity of 3000 km/sec! Oops.

Here’s another description with my 18-inch —
The “Egg Nebula” was viewed at 450x as this object is quite small but has a high surface brightness. This bipolar proto-planetary consists of two small round knots oriented SSW-NNE with the brighter component on the NNE end. This 12th magnitude knot appears ~10″ in size with an occasional star or stellar point at the center. Just SSW is a much fainter mag 14 knot, ~6″ in size and the two components are encased in a very faint, elongated halo so the dimmer component just stands out individually. Located just 4′ east of mag 8 HD 200371.

[EDIT SEP 29, 2010]: For additional discussion and a number of other observations of the Egg Nebula, be sure to take a look at this Cloudy Nights thread.