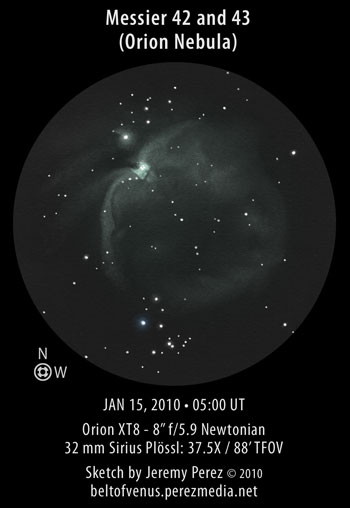 In my ongoing effort to refine my observation and sketches of M42/43, I made a new sketch on January 14. I used most of the previously sketched star field as a starting point so I could spend more time on the nebula. Working within a larger 6 inch circle really helped. The minty green color was striking throughout the nebula, particularly around the trapezium. As for structure, the sketch pretty much tells the story, except for the fact that there was a lot more detail to be squeezed out. I can tell that I’ll be coming back again and again for more.

The Orion Nebula lies 1500 to 1600 light years away and is the brightest diffuse nebula in the sky. It is the brightest portion of a much larger cloud of gas and dust which extends over an area of 10 degrees. This cloud also contains Barnard’s Loop, the Horsehead Nebula and the reflection nebula around M78. The brilliant M42 extends to a diameter of 30 light years.

The incredible complexity of the nebula is so great that various aspects of it have been given some creative names. Some of the more prominent are:
Fish’s Mouth = the dark lane extending from the north into the brightest portion of the nebula
Wings = the bright regions to both sides
Trapezium cluster = the bright cluster of stars pointed to by the Fish’s Mouth
The Sword = the wing extension to the south on the east
The Thrust = the bright nebulosity below the Trapezium
The Sail = the fainter western extension

The Hubble Space Telescope discovered dark, protoplanetary discs called Proplyds around the region of the Trapezium. These investigations have shown that the blazing radiation of the Trapezium stars is eroding the Proplyds so that the lower-mass stars forming there may not maintain enough material to form planetary systems.

M42 was discovered by Nicholas-Claude Fabri de Peiresc in 1610, but it seems strange that its nebulosity was not discovered sooner, since it is easily visible to the naked eye. Charles Messier cataloged it in 1769. 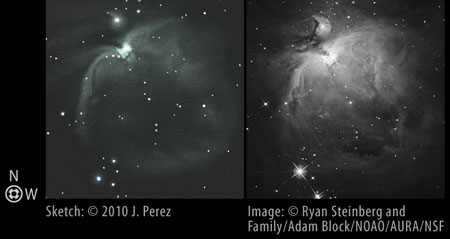 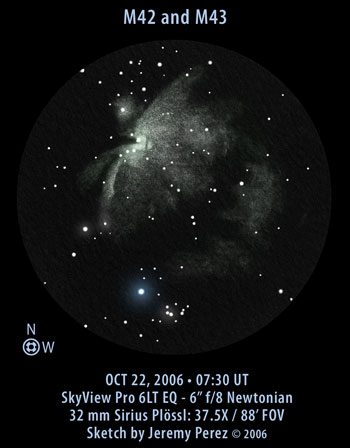 I’ve been looking forward to making another low-power sketch of this beauty. It continues to amaze me that the patch around the trapezium is so boxy. There is a break on the west edge of this patch, which brightens again on the other side. The northwest side of the larger extent of the nebula is the brightest. The southern wing has a nice sharp edge with a hook that points inward. After fading out to the southwest, there is some patchy brightening that subtly picks up again. I noted a minty green color that was strongest in the trapezium box, but extended subtly through the other bright portions of the nebula.

After having some trouble with the regular sketch paper I used on 2006/M4 (SWAN) earlier in the evening, I used a nice, sturdy sheet of smooth bristol for this sketch. It worked very nicely and took multiple layers of graphite without resistance. I did feel that my standard 3″ sketch circle is not big enough for the amount of fine detail available in this object. I may need to consider a 5″ circle for some objects in the future. The sketch took an hour and a half to complete and contains 103 stars. 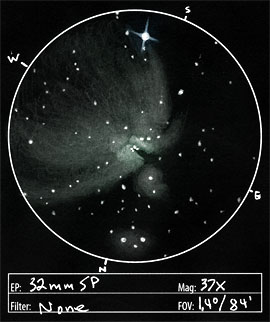 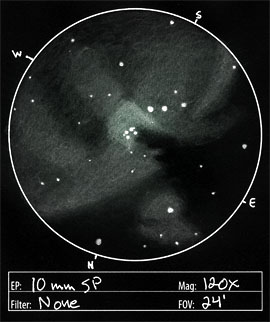 Boy, I was fighting fogged eyepieces on this one. For this first sketch of M42, I decided to go without the Ultrablock filter. It still looked great. One common comparison is that it looks like a bird, but the way the ‘wings’ of the nebula are swept back reminded me more of: A) a Shadow Vessel from Babylon-5, B) a face hugger from Alien, C) a brine shrimp. Heh. Man that’s not flattering for such a beautiful nebula. It was bright, and minty green in the lightest area.

When I viewed it yesterday in Bill’s 18″ dobsonian, it was a great aqua green with a sliver of salmon pink along the linear south edge of the trapezium pocket. It was so detailed, it looked like a dark storm cloud lit from within by a great bolt of lightning–setting its innards on fire in brilliant, ominous 3-D.

Back to my scope…the notch that flowed toward the trapezium from the east looked like a mitten reaching into a bright pocket to snatch the brilliant stars within. The larger, more diffuse interior of the nebula seemed brightest along the northern region. The outer boundary of the ‘wings’ on the eastern edge was gilded brighter than the rest of the inside…except for the trapezium pocket which is the brightest. I could just make out the E and F stars at 120X. The F star was very tightly bound to its bright companion. M43 punctuated the northeast section of the view with its comma outline.