If you find yourself at a dark site with Orion and Monoceros sprawled across the meridian, don’t pass up this gorgeous showpiece of the winter sky. While at Sunset Crater National Monument, working on a set of observing/sketching projects, I spent an hour re-observing the nebulosity surrounding the cluster. I used a tracing of my previously sketched star field as a starting point to save time.

As before, the nebulosity was visible unfiltered, but adding the Ultrablock filter helped immensely. The central hollow was bordered by a rather straight run of nebulosity to the north. The western edge of the hollow peeled away along the northwest edge, forming a beak-like appendage. The nebula seemed to curl away on the southwestern side, allowing an opening to form on the south edge of the central void. Two nested arcs of nebulosity wrapped the east side to complete the shroud. Further out on the north east edge of the field, some more smoky structure emerged. That striking yellow-orange star still popped out along the southeast edge of the central rim.

To allow better control over the shading, I prepared this sketch in a large, 6 inch (15 cm) circle. I used an artist’s chamois loaded with graphite to softly rough in the broad swaths of nebulosity. I then followed up with a graphite-loaded blending stump to build up the details and variations in luminosity.

The common designation NGC 2244 refers to the cluster of stars at the center of this stellar nursery. The nebulous region is described by the designations NGC 2237, 2238 and 2246. This nebula and star cluster is more than 1 degree across. Star formation is still in progress. This object lies about 5,500 light years away, and is about 130 light years in diameter. The open cluster (NGC 2244) was discovered in 1690 by Flamsteed. The nebulous regions were later discovered by John Herschel, Marth, and Swift. 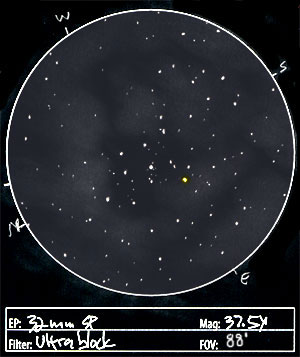 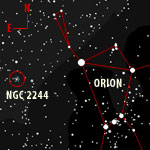 This is really an incredible nebula from a dark site. While the nebulosity is only hinted at without a a filter, once the Ultrablock filter is inserted, its beautiful form really takes shape. The central region is home to a bright, but sparse open cluster and is mainly clear of nebulosity, with softly glowing petals of light encircling it. The brightest portion of the nebula appeared to be north of the core, and the western quadrant appeared to be lacking in stars. A bright yellow star sparkled just east-southeast of center as shown in the sketch.