Move mouse over sketch above to view labels.
Click for larger version.

Jupiter and Neptune have spent the last several days passing within a degree of each other. I finally got out to observe the pair tonight when they were separated by about 48 arc minutes. Through the 32 mm eyepiece, Jupiter and its moons were dazzling of course. In comparison, Neptune was seriously outclassed. I hadn’t brought a chart with me, and I was worried at first that I might confuse it with one of several nearby 8th magnitude stars. But giving my eye a few seconds to just let things register allowed me to see the blue green color and know that was it. Examining it at 120X with the Pentax XW10 made the color appear richer and brought out the slightly soft, non-stellar appearance of its 2 arc second disc.

Although Neptune’s faint presentation kept it from being a spectacular conjunction, the view was colorful. Neptune’s blue-green met the bright cream color of Jupiter, the yellow of Ganymede, and the yellow-orange of Io. Realizing that Neptune is nearly five times further away than Jupiter, but both were sharing the same space in the sky made for an enjoyable observation.

I made a graphite sketch at the eyepiece, detailing color, equatorial cloud belts, flaring and diffraction spikes around Jupiter. I scanned the drawing and used Photoshop to clean up the stars, Neptune, and Jupiter’s moons. Jupiter is redrawn completely and flare/diffraction spikes added using digital tools. I had a little trouble deciding the best way to present the view, so I’ve included two images. The second one below zooms in a little closer, and clicking for the large version may show details a little better.

The pair is widening now, and in a couple days they will be more than a degree apart. So be sure to get a look right away if you want to see them in the same telescopic field of view. 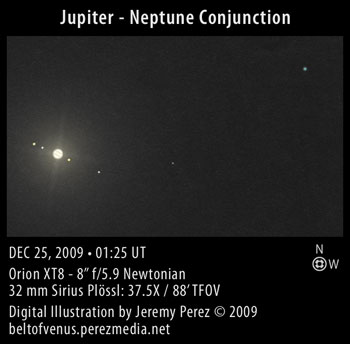