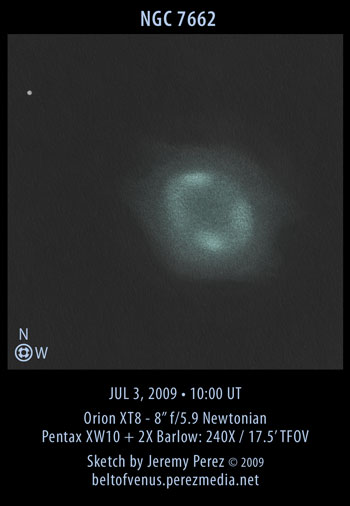 I made this follow up observation of the blue snowball to get a more detailed look at structure for the October 2009 issue of Astronomy Now. The inner and outer shells possessed a soft, pentagonal shape. The inner shell was annular and had brighter condensations to the west, southwest and northeast. The outer shell appeared to have soft webs extending outward. As before, it possessed a beautiful blue-green color. 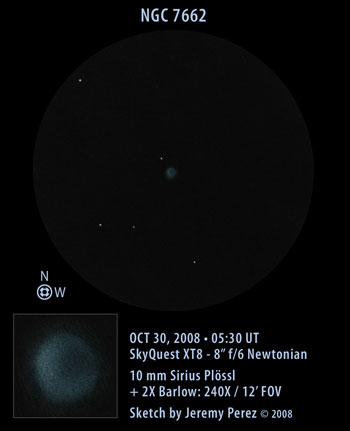 The ‘Blue Snowball’ nebula didn’t disappoint, and shone with a subtle cyan-green color when I aimed the Dob at it. It was elongated roughly north-south and had an uneven appearance. The main shell was shaped like a soft, round-edged pentagon. The east side was brightest, while the northwest side opened up to allow a darker intrusion into the nebula’s core. This brighter shell appeared to be surrounded by a slim, subtle halo. Although I could not see the central star, another neighboring star paired itself with the snowball, about 1 arc minute to the northeast. The nebula itself appeared to be about 30 arc seconds in diameter.