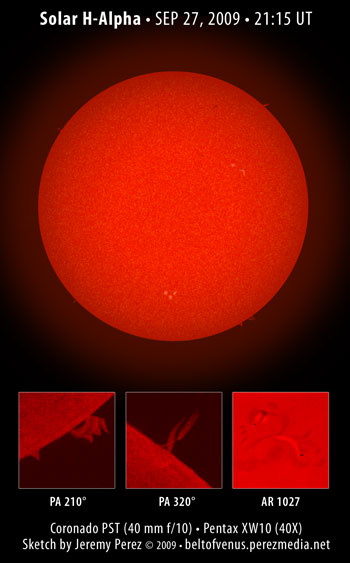 Move mouse over sketch above to view labels
Click image for larger version.

A beautiful set of proms and dynamic active regions decorated the sun today. AR 1027 was alive and three regions fizzed with pores amid a network of plages and filaments. These spots appeared and disappeared within a span of mere minutes. I did not spend as much time on AR 1026, but its most prominent feature was a triangle of three lighter spots. Three other filaments were strewn across the northern hemisphere. One prominence at PA 210 degrees exhibited a magnificent cockscomb shape right next to a blazing, triangular pyre. At PA 320, a braided prominence swirled away from the solar limb.