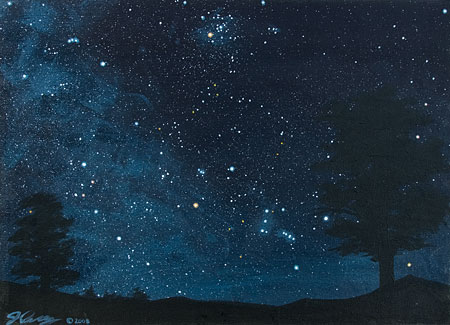 I can’t remember the last time I picked up a paint brush to create something I found inspiring. It’s been too many years, that’s for sure. After a few years of creating technical illustrations of my observations, I’ve really gotten the urge to do something a bit more creative here and there. I used to paint with watercolor, but the thought of doing night-sky paintings with that medium sounded too much like hard work to me. I’ve never taken the time to practice and learn oil or acrylic painting until now. So I started doing some research and last month I picked up some tubes of acrylic paint, a couple brushes I could dedicate to it, some priming gesso, and some parchment paper & tupperware containers to make stay-wet palettes. Then last week, I picked up a few 12″ x 16″ pre-primed canvas boards (not framed canvas–yet).

Saturday night, I went to work on a painting of Orion, the Hyades, and the Winter Milky Way rising at Cinder Hills Overlook. It’s based on a photo I shot from that spot about three years ago. I had re-worked that photo earlier last week too, and was feeling a groove getting started. Wow it felt great to whisk paint across that canvas. I was curious to see how well I could balance keeping the field ‘loose’ while still portraying a reasonably faithful star field.

So, for my first canvas acrylic astro painting, I learned a few things right away. Here is what I did, and what I figured out along the way.

So that’s it for my first astro painting. I hope to apply my observing experiences do more of them as I get the chance. Below is the photo on which I based the painting: 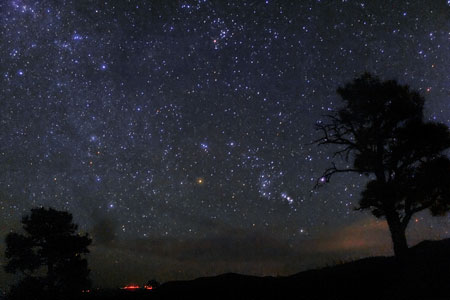