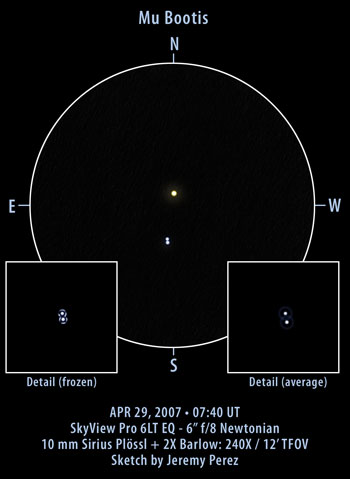 I wasn’t prepared for what a pleasant surprise this ‘double’ star was at high magnification when the B star turned out to be a close double itself. The yellow primary appeared to be separated from the BC combo by about 120 arcseconds. The actual value is 108.4. I estimated the main PA at about 164Â°, with an actual value of 171Â°.

The BC combo appeared purplish-blue, and were close enough that their first diffraction rings intersected each other, but did not intersect the diffraction discs. This works out to a separation of about 2.2 arcseconds. Their PA appeared to be from 0 to 10Â°. When I first checked the WDS Catalog, I was momentarily frustrated to see 1.3 arcseconds and 327 degrees. But then I realized that was a measurement from 1826 on a very close pair. It turns out their orbital period is 246 years. The actual 2007.3 values calculated from Brian Workman’s calculator are 2.25 arcseconds and 6.2Â°.