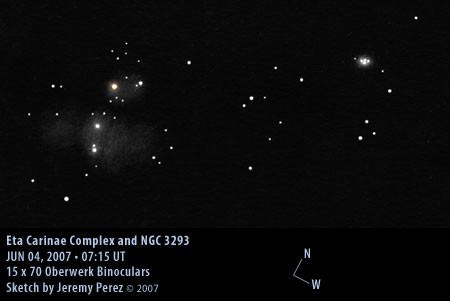 The observing highlight of the evening atop Haleakala was gazing through my binoculars at the rich starscape in the vicinity of Eta Carinae. I had not done any homework on the area beforehand, so I approached it with unexpecting eyes. The mottled depths of the surrounding Milky Way, the smattering of intensely bright foreground stars, the abundance of open clusters of all shapes, sizes and intensities, and the stunning patches of glowing nebulosity made the whole region a delicious feast for the eyes. One incredible open cluster to the northeast, nearly took my breath away, but I did not have time to even attempt a sketch of it. Instead, I chose to render the region bracketed by the Eta Carinae complex and a much more manageable cluster, NGC 3293.

Eta Carinae was a brilliant orange star that surrounded itself in a plush comfort of nebulosity. This misty region ended abruptly to the south and then emerged again to surround a trio of bright stars. The observation and sketch were done more hastily than I would have liked and I know there was more detail to be extracted from this bright nebula, but I took what I could get. The northwest side of the view was punctuated by the small, bright open cluster, NGC 3293. Four bright stars announced themselves within its glowing boundary of unresolved starlight.

This section of the sky is still beckoning me, and I know I will have to return to it again with more time to spare. Even if I only have binoculars again the next time, it will still offer more than I can possibly absorb.

Eta Carinae is one of the most massive stars in the universe and is likely greater than 100 solar masses. It is about 4 million times more luminous than the sun, but radiates 99% of this energy in the infrared. Due to its extreme mass, it is expected to go supernova within the next few hundred thousand years. In the meantime, as it rapidly sheds matter, it goes through sporadic, violent outbursts. The most recent outburst peaked in 1843 when Eta Carinae became a magnitude -1 star, second only to Sirius. This eruption generated a rapidly expanding plume of gas that now forms a fascinating dumbell shape (see Hubble image below). 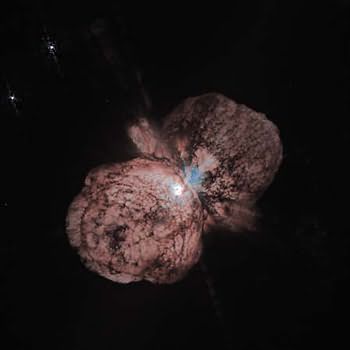 Image courtesy of NASA and STScI.