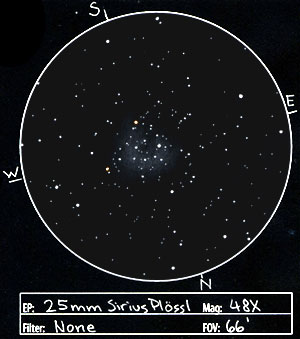 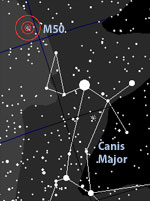 This was my second observation and sketch of M50. I wanted to give more attention to the entire thing, and I’m glad I did. The initial impression that I got was of a couple spiraling arms of stars spinning clockwise from the south and eastern sides of the cluster. There was a fine granular base around the central portion. Further scrutiny revealed this hazy region as forming ‘U’ shape with the opening on the south end. The orange stars were apparent this time, although I was aware of more color in my first sketch.

M50 lies 3200 light years away, contains around 200 stars and is about 20 light years in diameter. Its overall extension is given as 15′ x 20′, while the main central condensation is 10′ across (which is apparently what I estimated). There are several yellow giants in the cluster, and one red M giant south of center which corresponds to the glaring orange star I noticed right away. The cluster was discovered in 1772 by Charles Messier, but may have been discovered even earlier in 1711 by G. D. Cassini. 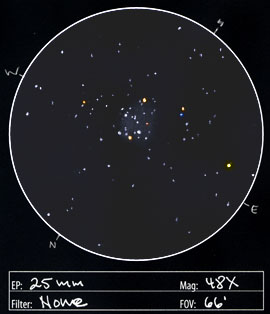 By some miraculous twitch of meteorology, this evening turned out to be clear. M50 is in Monoceros, but I have zero experience perceiving and navigating this dim constellation yet. Fortunately, it’s right on the border and brilliant Canis Major points the way easily. I just slewed 4Â° north from the snout, and then went 2Â° east. The cluster is bright and obvious. It is a very rough circle of stars with bright orange members sprinkled around. There is a particularly obvious orange star on the south edge. Besides these brighter members, there is a mottled background of stars that seems to be strongest along the northern side of the cluster. I estimated its diameter at 10′. After viewing some astrophotography, I am suspicious of a dim red star I marked in the center, as it’s not apparent in several shots I reviewed.