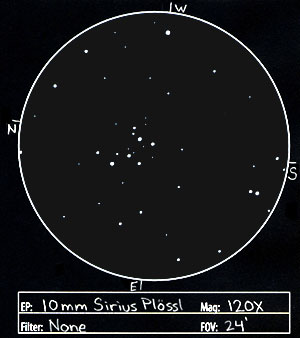 My first observation of this open cluster was over a year ago, and happened before I was putting more effort into my sketches. So I decided to give it another go. It’s not a spectacular cluster and doesn’t exactly pop out of the Milky Way backdrop, but what it lacks in beefiness, it makes up for in geometry. It has a boxy, mechanical look to it. The seeing wasn’t great (what’s new), and lots of glare from the cement factory (what’s new x 2) were hosing down any hopes of catching distinct positions of fainter member stars. There was a subtle impression of Milky Way granularity all across the background. The main rectangle had an approximate 2:3 aspect ratio. Sketching this little booger really put me through some paces. I had a heck of a time getting the angles and proportions right, so the original sketch was loaded with erasures and Exacto blade scratches. I ended up tracing over the mangled sketch on a new sheet so it wouldn’t look all gummed up before scanning.

M29 is estimated to be anywhere from 4000 to 7200 light years distant. The wide range is due to uncertainty of how much the clusters starlight is being absorbed by intervening interstellar matter. The light from the cluster is actually being polarized by this matter, which is apparently 1000 times denser around the cluster. It may absorb so much light that the cluster would be 3 magnitudes brighter if viewed clearly. M29 is approaching us at 28 km/sec and is estimated at 10 million years old. It was discoverd by Charles Messier in 1764.

I know this sounds lame, but this open cluster looked ‘cute’. I don’t think many people care for it because it’s pretty simple. There were 7 bright stars arranged in a gridlike pattern. The main shape is a little square with 2 more stars making a right angle jog off the north corner. Another star makes a diagonal jog off the west corner. Some dimmer stars were involved, but no graininess. Looking around a bit, there is an asterism of stars to the NW that point to the cluster. Two sets of double stars to the SE complete the effect of an axis bisecting the cluster.