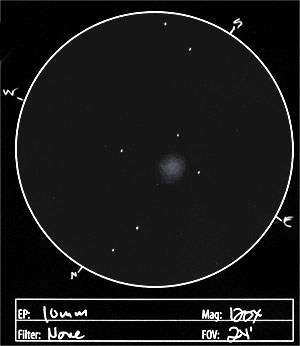 Right after viewing M5, this was definitely a shift to the other end of the globular spectrum. I didn’t resolve any member stars, although once or twice I saw what looked like a star flicker into view near the north-center core region. The brightness was very soft and gradual. It brightened toward center, but very subtly. Limiting magnitude was pretty crummy in this area of the sky, with 20-Ophiuchi being the faintest star I could make out (Mag. 4.6). The visual extent I could make out was about 2.5′.

M107 is unusual for containing dark obscured regions, and is a very ‘open’ globular cluster. This allows its interstellar regions to be explored more easily. M107 is 21,000 light years distant, with a diameter of about 80 light years. The cluster is approaching us at 147 km/sec. Although its photographic diameter is 13′, its visual extent is about 3′.

M107 was discovered by Pierre Méchain in 1782, and was probably the latest Messier object to be discovered. It was added to the Messier catalog by Helen Sawyer Hogg in 1947 along with M105 and M106. It appears likely that Méchain had intended to add it to his future edition of Messier’s catalog. William Herschel independently discovered it in 1793 and was the first to resolve it into stars.