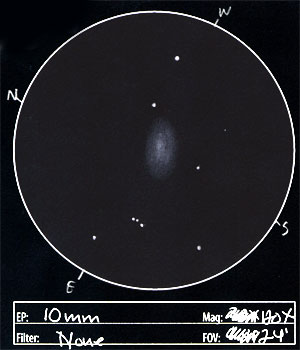 This evening, we were visiting friends and the kids were playing inside. I set up the scope in their back yard and gave a brief tour of some prominent DSOs to them before moving on to an official observation. The galaxy, M63, was bright and large, although light pollution made it difficult to discern its full extent. I’m sure it is wider and larger than depicted in the sketch. It was elongated west-southwest to east-southeast. The core was bright, but not stellar. It seemed that I caught a brighter section in the disc to the southwest side. Other than that, I couldn’t pick up other structure or mottling. A tight trio of foreground stars hovered about 4′ off the east edge of the galaxy. I tried 240X magnification, but it was too difficult with extraneous light from the helpful neighbors who apparently heard our conversations and decided to show us the porch light.

M63 lies about 37 million light years away and seems to form a group with M51 and other smaller galaxies. The mottled spiral arms are peppered with star forming regions. It was discovered by Pierre Méchain–his first DSO discovery–in 1779. Its spiral structure was later discovered by Lord Rosse in 1850.