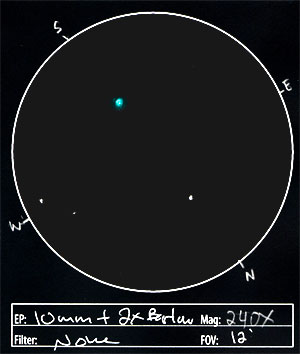 My first and only observation of Uranus was within a week of getting my telescope late last Summer. I wanted to firm up that observation. It was easy to find Uranus. I actually caught it in binoculars first as I was familiarizing myself with the star field. It was about a degree southwest of lamba-aquarii. Through the scope at 38X, it was a cool blueish dot, unique in color among the other stars. At 240X, it displayed a sky-blue color, perhaps shifted a bit toward green. There wasn’t much more to say for the 240X view other than a couple in-focus stars sharing the field demonstrated it wasn’t a focus issue giving the planet its thicker dimension. Seeing was pretty crummy though, so the planet maintained a very soft edge which I tried to indicate in the 240X sketch. The 38X sketch gives context with surrounding stars for verification of position. The yellowish star about 20′ northwest of Uranus is designated SAO 146323, a mag. 7.36 K2 star. After viewing with the telescope and binoculars, I was able to sight Uranus naked-eye. I thought that was very cool.