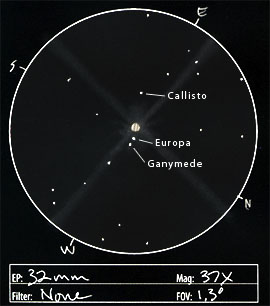 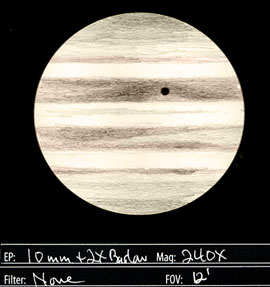 In the midst of some exceptional dso viewing from the Cinder Hills Overlook at Sunset Crater National Monument, I happened upon a shadow transit across the face of Jupiter. The transiting moon turned out to be Io. I could not see Io itself, but the shadow was immediately evident. Over the course of the observation and sketch, the shadow moved noticeably toward Jupiter’s eastern limb as it strode through the midst of the dark northern equatorial band. Seeing steadied enough at times that I was able to catch brief glimpses of detail in the cloud bands. I still need to work to train my eye to observe features on this planet. But I did notice a hollowness in the southern equatorial band that gradually closed up heading from east to west across the planet (Jupiter’s east to west…not celestial east to west). I also noticed a thin band running right along the equator. At lower power, Callisto was visible to the celestial east, and Europa and Ganymede were visible to the west.