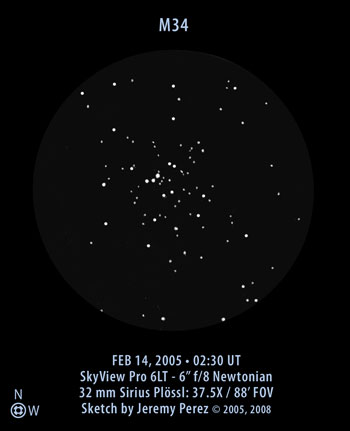 The above sketch is an update to the original to clean it up a bit and update the format. The original is shown below. 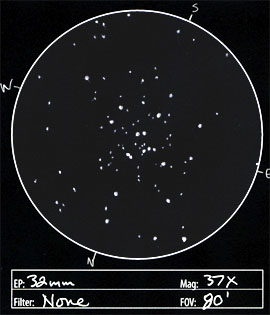 This is a large, bright, easily visible open cluster. I didn’t notice any dense granularity–maybe the moon-glow in the sky drowned any of that out. It seemed nice and open. It was roughly circular, and appeared to be 20′ in diameter. The brighter stars were scattered fairly evenly with a number of apparent doubles throughout. The brightest stars formed a miniature ‘Orion’ constellation–but with only 2 belt stars…ok, and the sword is turned sideways.

This observation was a real race against the clouds. I saw on the NOAA satellite around 5:00 pm that clouds would arrive around 7:30 pm. I wasn’t able to get started until around 7:20 pm. The clouds didn’t hit until 8:00 pm. It was just enough time for the sketch! But not enough time to search for color, and no color really jumped out incidentally during the sketch. The cluster was simple to find–just center on Almach in Andromeda, then slew 7° east. Bam!

M34 contains about 100 stars and lies about 1400 light years away, which makes it about 14 light years wide. G. Meynet’s Geneva Team gives the cluster an age of 180 million years. M34’s motion through space has been found to coincide with The Pleiades, NGC 2516, IC 2602, The Alpha Persei Cluster, and the Delta Lyrae Cluster–referred to by O. J. Eggen as the “Local Association”. The cluster was likely first discovered by Giovanni Batista Hodierna prior to 1654, and then rediscovered by Charles Messier in 1764.