A couple nights ago, a SpaceX Falcon 9 rocket launched a group of Iridium satellites and put on an awesome twilight show across the southwest US. Twilight rocket launches are incredible. If you get a chance to see one, just stop what you’re doing, step outside for a few minutes and take it in. Of course, that’s kind of tough to do if you don’t know it’s coming—more on that in a bit.

Friday night’s launch had a very precise launch window and was set to go off at 6:27:23 PM Arizona time. Because Vandenberg Air Force Base is over 500 miles away, the rocket never gets more than a few degrees above the horizon as it travels downrange. So a low horizon is important if you want to see as much as possible. At first, I wanted to view and shoot it from Robinson Crater north of town so I could get the San Francisco Peaks in the shot. But I got concerned that the Peaks were just too close to that location and their height would block too much of the exhaust plume. So I switched to the summit of Mount Elden instead. By hiking beyond a summit gate, I could get enough elevation to put the west summit below the horizon and have a completely unhindered view.

Some notes I drafted about elevations, times and camera settings before heading out

Flagstaff had gotten some snow a couple nights before, and I was worried the road to the summit might be in bad shape. As I headed up the mountain, I counted off the minutes before the point of no return — where I’d have to commit the rest of the way, or else turn around if I wanted enough time to get to my backup spot at Buffalo Park. It was all good though. The road only served up some light snow in a few spots, and I got to my parking spot with 40 minutes to spare. 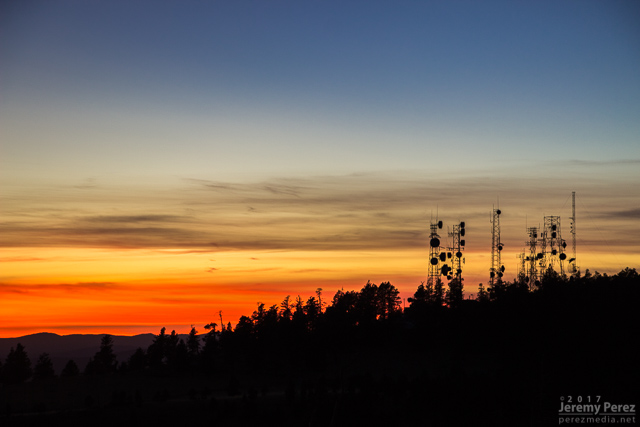 Sunset behind the west summit towers

The temperature was just a few degrees below freezing, so not too bad, but the wind was blowing and I had to layer up like an onion. I grabbed the tripods and way-to-heavy camera bag and hiked a couple hundred more yards up the road beyond a closed gate to get the vantage I was after. I figured Vandenberg AFB would be roughly behind Bill Williams Mountain, so I framed for that to be toward the right side of my time lapses. But I wasn’t 100% sure, so I fudged things to the right a bit more to be safe.

After getting the tripods balanced on the slope with two DSLRs and one camcorder dialed in, I started testing exposures. It turned out that twilight was brighter than I expected so I could keep exposures to just 2 seconds on both cameras/lenses—which was good, since it would keep the fast moving rocket a bit sharper. Turns out the exhaust plume was so bright, I could have knocked that down by a third or half! But when you’re shooting a time lapse, you don’t get a chance to verify or change things partway through without ruining it.

At 6:25, I started the time lapse intervalometers and got the video camera running. Learning from my 2016 Grady, Arkansas tornado video snafu, I made sure the red icon was really really red, and definitely not green.

A couple minutes after the scheduled launch, the cirrus deck to the west got a bright spot—directly over Bill Williams Mountain—and the show was on! a few seconds after cresting the clouds, the pillar of exhaust dimmed, and after a few more seconds, brightened back up. That was the first stage shutting down and the second igniting. I tightened up zoom on the video camera and was rewarded with a beautifully turbulent view of the second stage plowing through the upper atmosphere as the bright knot of the first stage lagged further behind.

First view of the launch 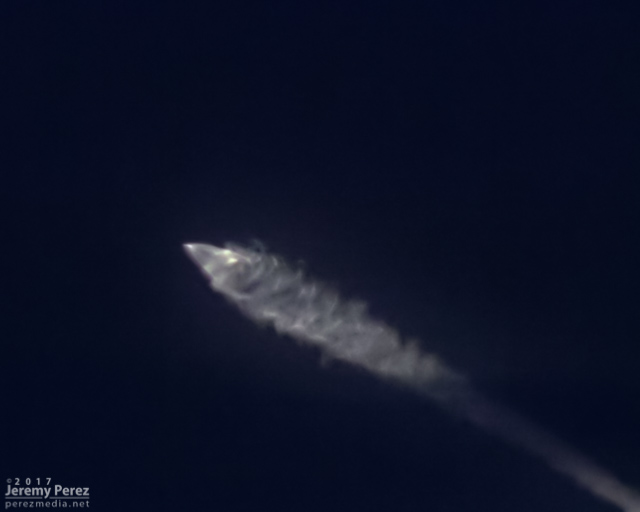 As it got above the denser air, the exhaust envelope became more laminar and the first stage started doing some interesting things. Bright arcs started pulsing out of it, putting on a little show within the show. My guess is that was caused by the reaction control system firing to orient the first stage and have it fall where they wanted it. From what I read, SpaceX was not planning on landing the stage after this use, so it probably just needed to splash down in the right spot. 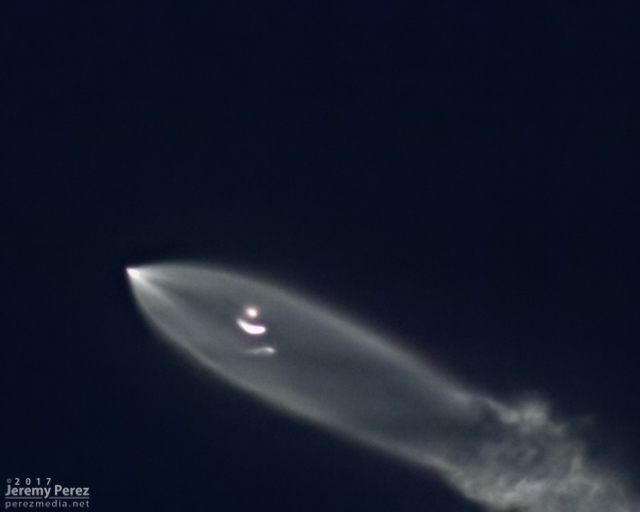 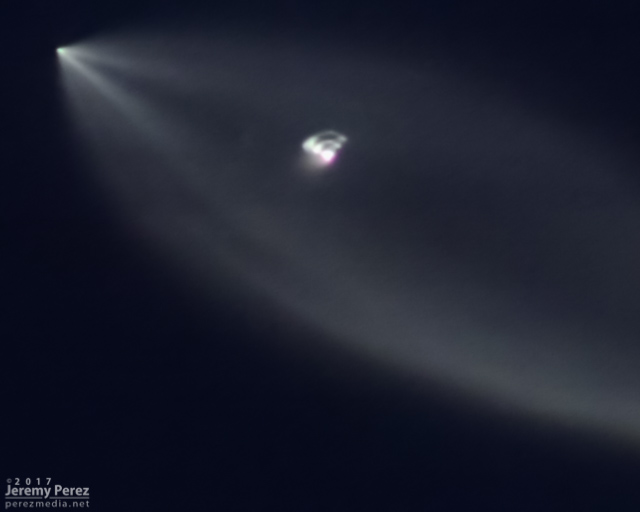 As the rocket moved on to the south, it kept burning and lighting up the sky—much longer than I was expecting. Eventually, it disappeared into the distance and the sky was left painted with an iridescent shell that drifted off to the southwest. 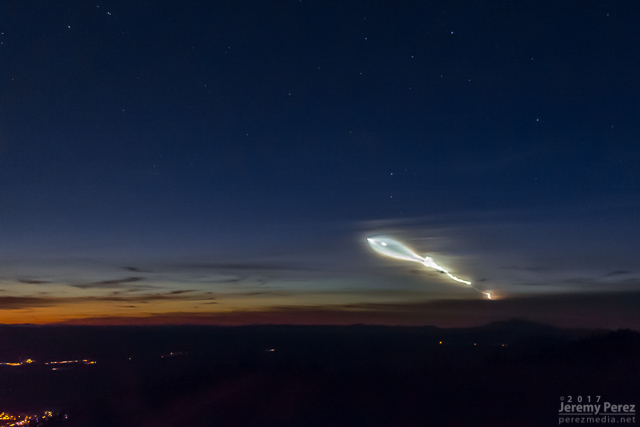 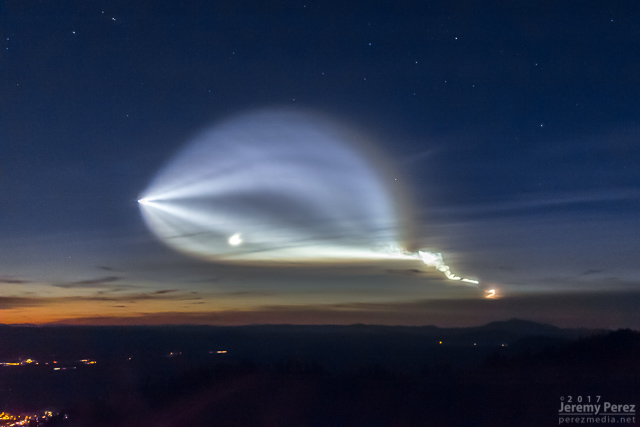 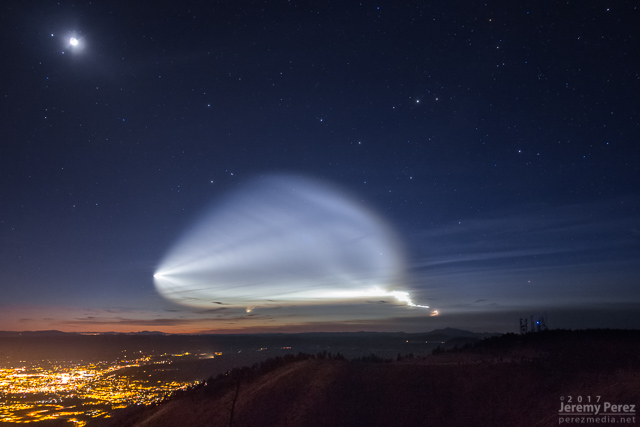 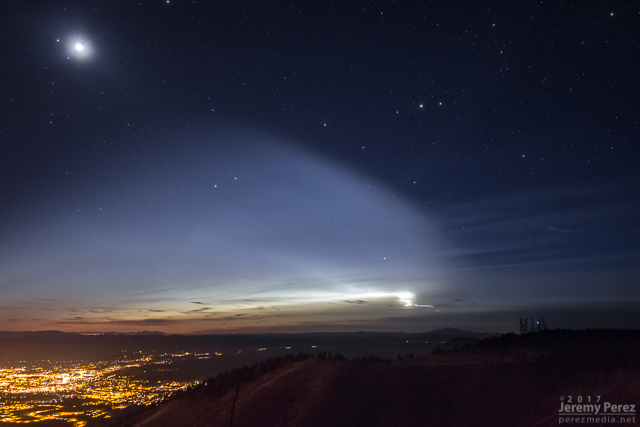 After 20 minutes, it had dissipated and I took some more shots the north where air glow was lending an interesting reddish-purple hue to the sky over the Peaks. 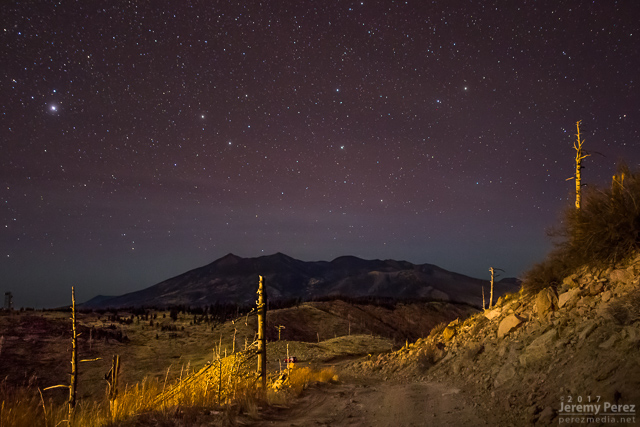 So how do you find out if another twilight launch is coming up? First, twilight launches don’t seem to be very frequent. A good place to start is to sign up for Brian Webb’s Launch Alert Newsletter. He posts info about upcoming Vandenberg (and sometimes White Sands) launches. If an upcoming launch happens a half hour to an hour after California sunset, it’s time to pay close attention. Brian will usually call out the possibility in the launch details if it’s at an ideal time. Most launches during the day and middle of the night are only visible close to Vandenberg.

Having the sun about 14 degrees below my local horizon seems to be just about perfect for a dark sky against a brightly lit exhaust plume. I did accidentally happen to see an unscheduled Vandenberg missile test when the sun was 21 degrees below the horizon. The expanding dome of exhaust wasn’t as bright as this one, but was still an excellent photo op.

I’ve also caught a couple White Sands launches where the sun was just a few degrees below the horizon. While those launches were visible and fun to watch, the sky was too bright to get the full effect. 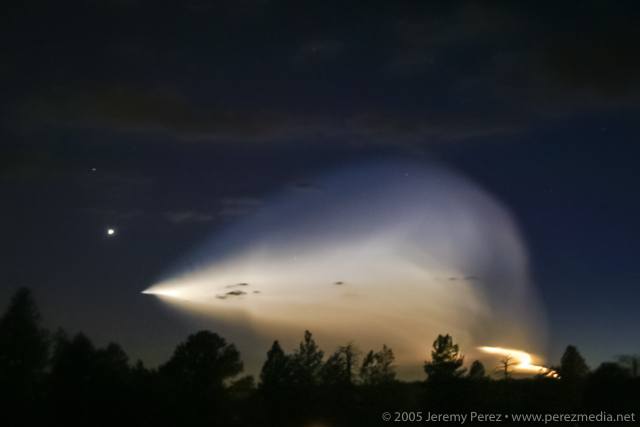 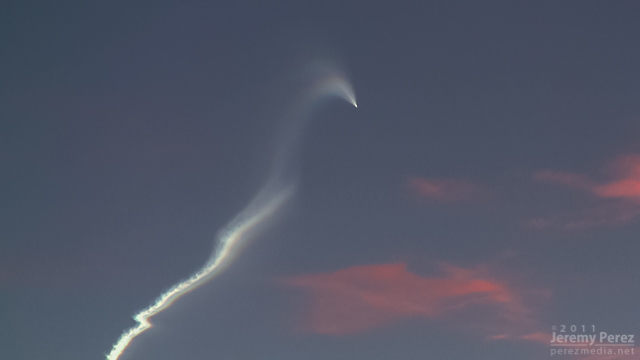 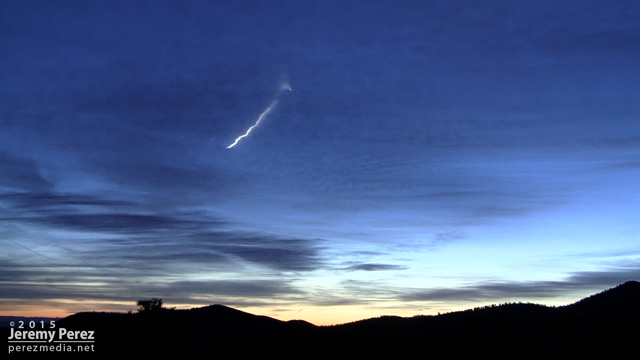 If we get another twilight launch soon, I think I’ll dedicate a zoom lens on one of the DSLR’s to a tight view instead of using the camcorder for that part. Noise was really high & I had to do a lot of smoothing.

Editing, rendering and quality control were tough on this one. I used a mix of frame blend and masked optical flow to smooth and slow the time lapse segments a bit. My processor does not like toying with optical flow renders and bogs down int the worst way…and it doesn’t help when you keep finding new glitches that need to be fixed and re-exported.

If you live in the southwest and didn’t get a chance to see this one, I hope the next one works out. I know I’ll be keeping an eye out!