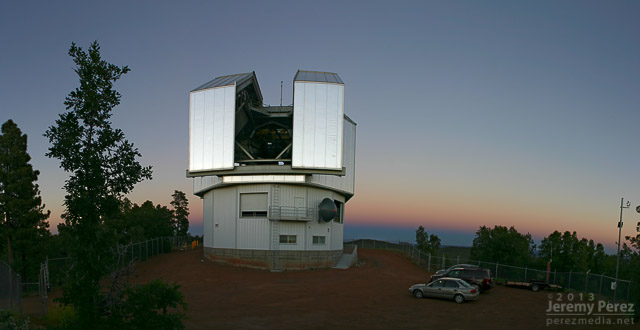 The Belt of Venus rises behind the Discovery Channel Telescope

On June 17th, I joined Tom and Jennifer Polakis, Michael Collins and Stephen Levine at the Discovery Channel Telescope for a special visual observing project that Tom coordinated with Lowell Observatory, the DCT team and Astronomy Magazine. My role in this incredible adventure was to create quick sketches of the objects we observed. That’s right—sketching with a 4.27 meter telescope! Dream. Come. True. …Matches pretty well with the title of Tom’s article, “A Dream Night with the Discovery Channel Telescope”. This observing run was an incredibly unique situation, at just the right time–something that won’t happen again…as much as I wish it could!

The Discovery Channel Telescope is located at the top of an old cinder cone about 40 miles southeast of Flagstaff, near Happy Jack. It was constructed as a partnership project between Lowell Observatory and Discovery Communications. Our opportunity to observe there was coordinated by Tom and Stephen just before the facility was set to become fully operational.

When I drove up to the gate just before sunset that evening, everyone else had arrived and they were busy shooting photos, exploring the grounds, and circulating in awe inside the facility. My first impression as I crested the last flight of stairs to be face to face with the scope was, “I can’t believe I’m actually standing here.” The top deck of the dome was spacious, painted light gray with the huge fork mount accented in rich blue. The shutters were all wide open–not just the main aperture, but a large opening on each facet of the dome. Three-hundred sixty degrees of surrounding forest and distant landscape were lit by the warm hues of the setting sun, and easily visible while standing next to this amazing instrument.

The telescope itself was a wonder of enormous, pristine gears, struts, solenoids, cables and inscrutable instrumentation surrounding the enormous 4.27 meter primary mirror: a beautiful, meticulously crafted sea of glass open to the air and easily within arm’s reach—if one were to be so reckless. High above, the convex 1.4 meter secondary mirror was a work of wonder in itself. 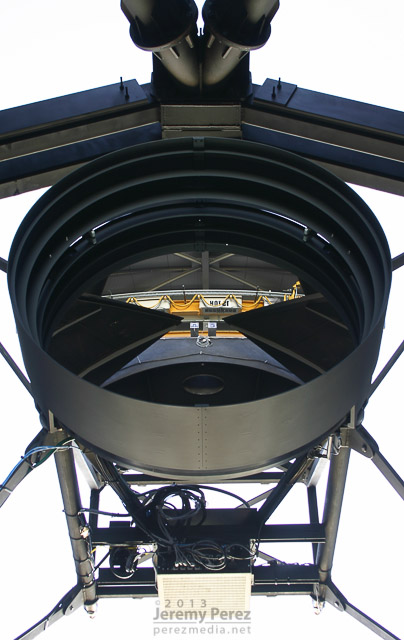 As I brought my sketching supplies up to the dome, the rest of the group was taking in twilight views of the Moon and Saturn. In between those views, Michael reminded me that the Belt of Venus was starting to emerge over the eastern horizon. I ran outside, scaled a hillside just inside the fence, and grabbed some shots of the dome and Belt of Venus for some panorama stitching later. (See image at the top of this post–the magazine ended up using that shot as the lead spread photo for the article.) 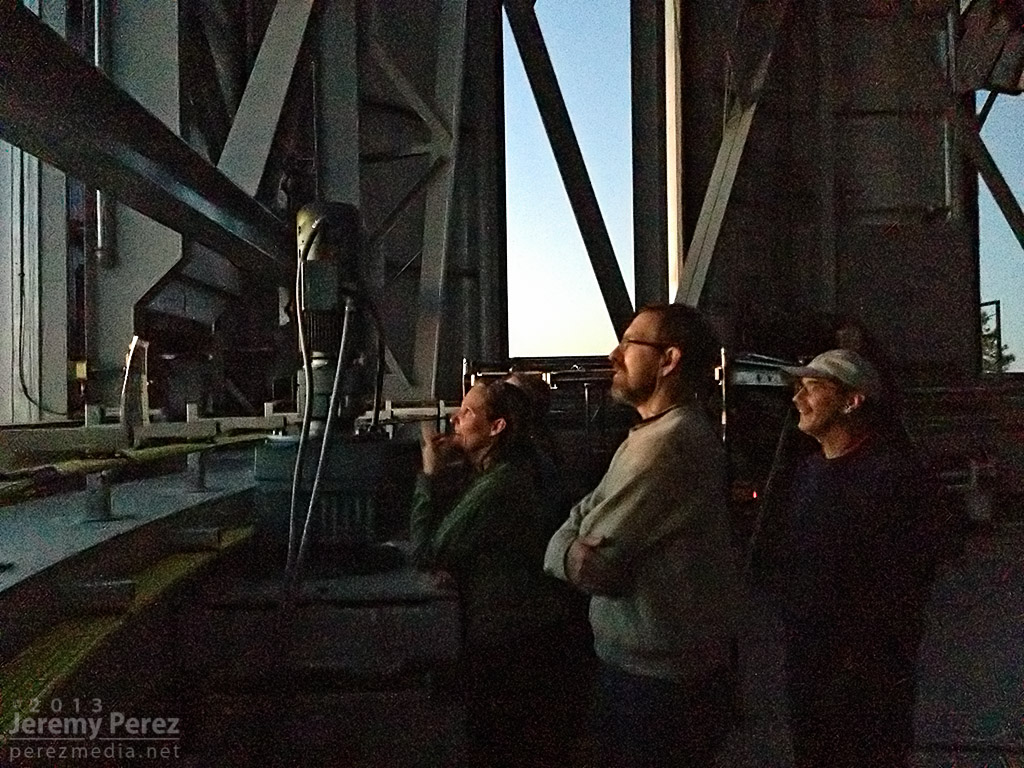 As twilight darkened, Saturn was the dramatic warm-up act. At 865X the crisp, bright, huge view of the planet was a foreshadowing of great things to come. I decided to embarrass the entire group by taking a few quick iPhone photos through the eyepiece. Tom was prepared for a more professional approach and while we waited for the sky to get darker, he hooked up his imaging equipment and captured some video for processing later. 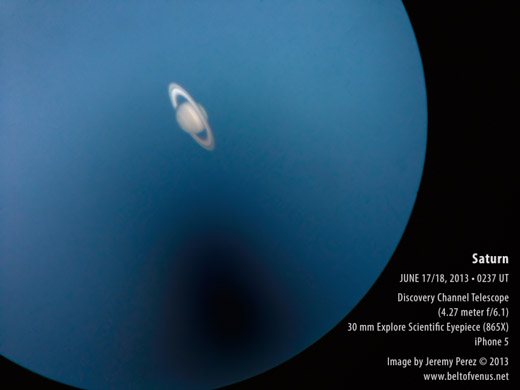 iPhone photo of Saturn through the DCT 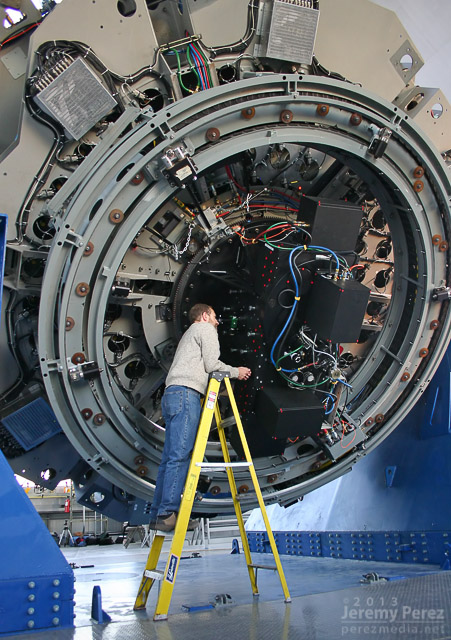 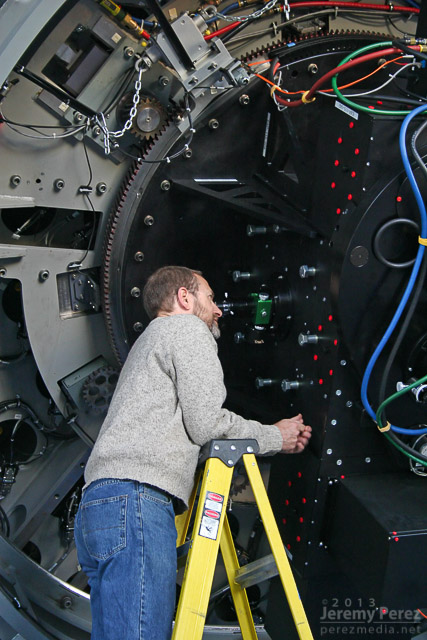 Tom Polakis takes in a twilight view of Saturn 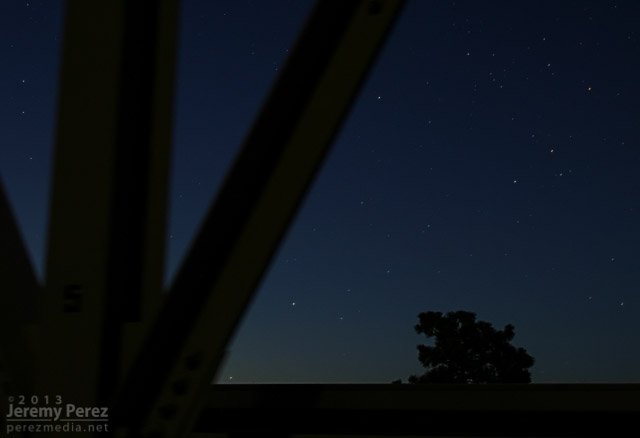 A dragon-esque ponderosa pine guards the perimeter as twilight deepens

Once the imaging run was complete, the scope slewed over to our first deep sky target of the night:

When my turn came at the eyepiece, I peered in, and was a kid experiencing the opening scene of Star Wars for the first time. Seriously. Turquoise light sabers twirled in a fluid dance had burned a gorgeous spirograph pattern in the eyepiece and straight into my mind. How could a telescopic view be so perfect? Once again I was working to pull myself out of the “I can’t believe this is happening…” frame of mind. I had a sketch to pull off, a unique experience to record. 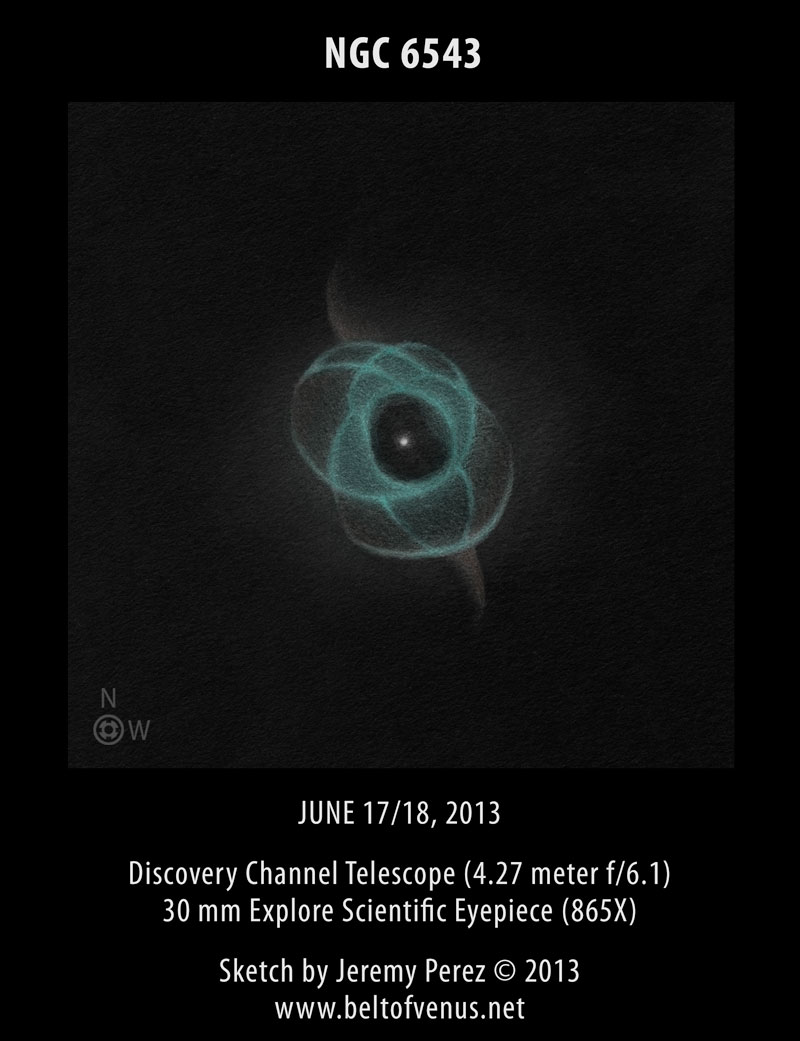 Drafting such a geometrically complex and stunning view in a few short minutes is an impossible task. I needed to shorthand the sketch and capture the key structures for re-creation later. Everything in the sketch was direct vision, but there was much more to be seen and recorded. I can only imagine what would happen if I was able to exercise a couple hours plus averted vision into the process.

I had another ten sketches to go, and a lot more dorky things to exclaim each time I stepped up to the eyepiece. Unfortunately, I didn’t record the order in which we viewed all the objects, but this is roughly the order:

As tight as the view was, it was difficult to get oriented at first. But what was very clear was the flocculent texture showing up around the northeast half of the galaxy’s core. The intricate dust band was rich with lumpy texture and continued around the entire core, but was much less distinct on the other side. 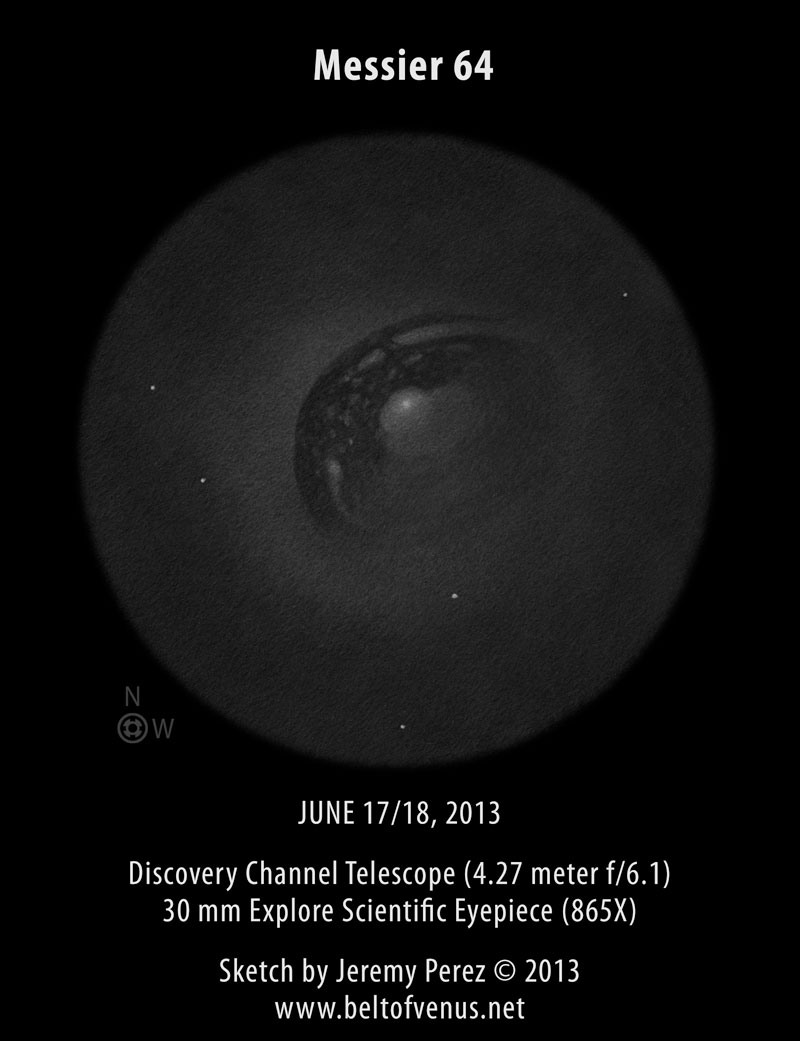 The core of this galaxy cluster served up 13 galaxies. 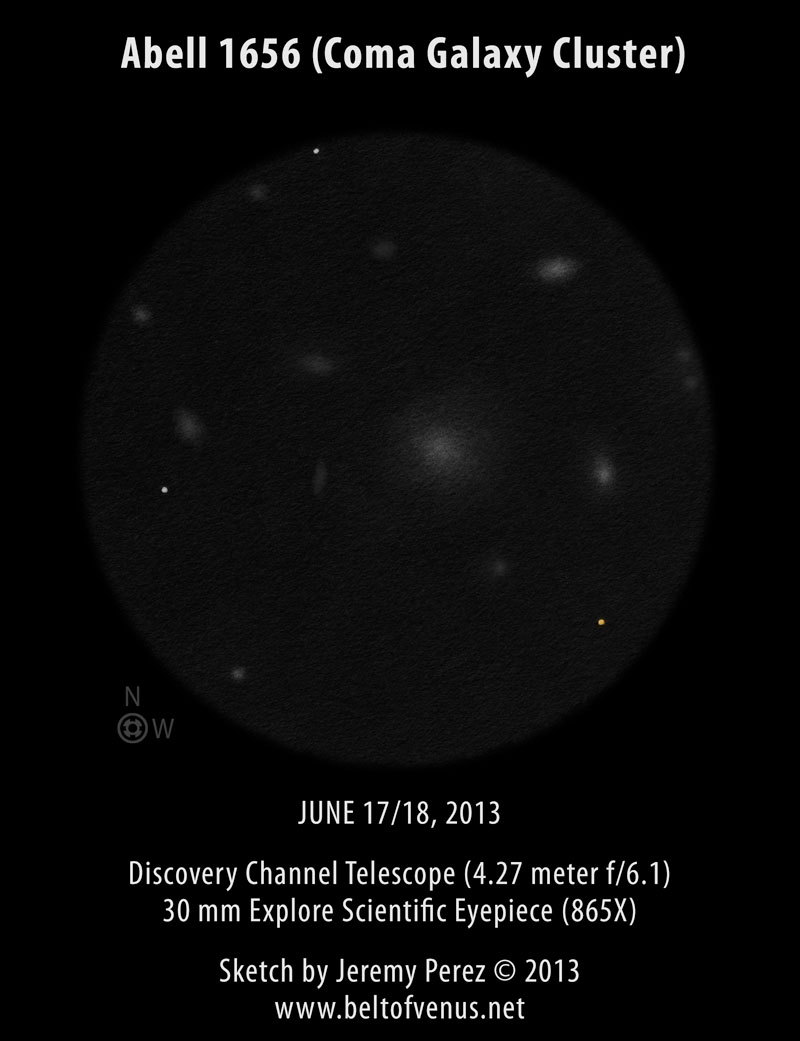 Like M64, this was a disorienting experience, due to the tight field. The structure was rich and extremely complex. The field was littered with lumpy structure and HII regions that defined its spiral arms. If I could spend a couple more hours with the Cat’s Eye Nebula, I could spend a couple more nights with this view before I could hope to grasp the range of detail that was available. 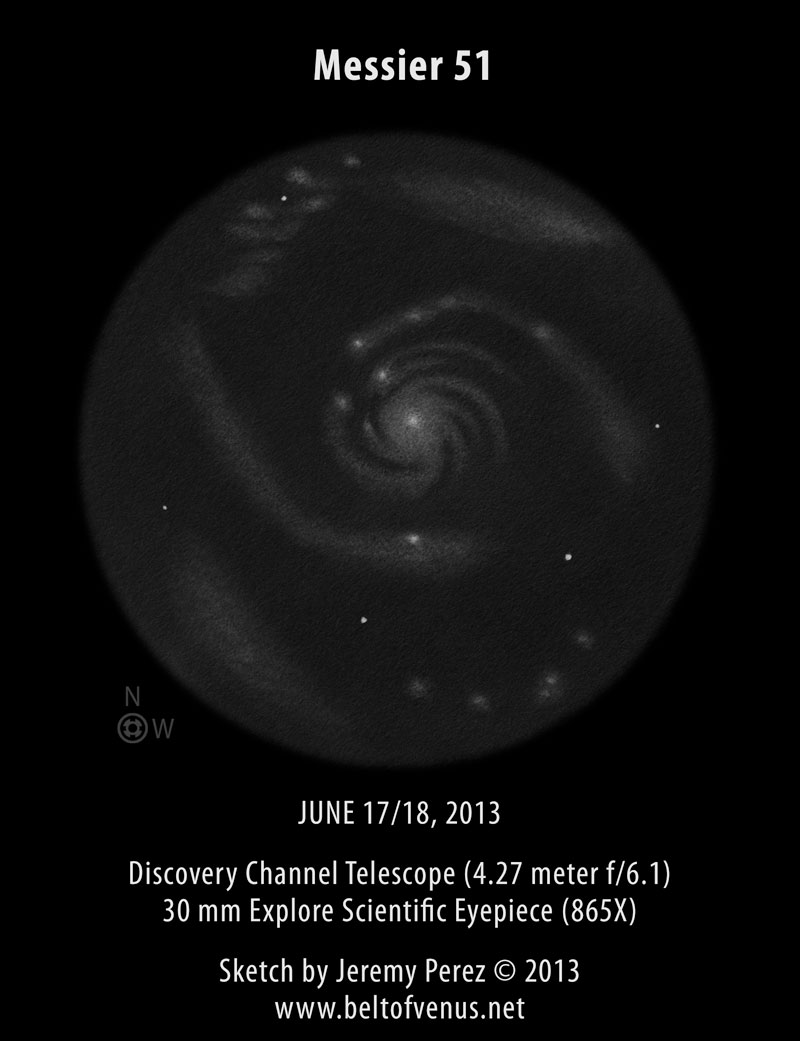 After viewing the core of M51, we switched to the core of NGC 5195. I’m not as happy with this sketch. It’s pretty stylized, but captures the dark dust band reaching across its core and some variations in brightness I picked out. 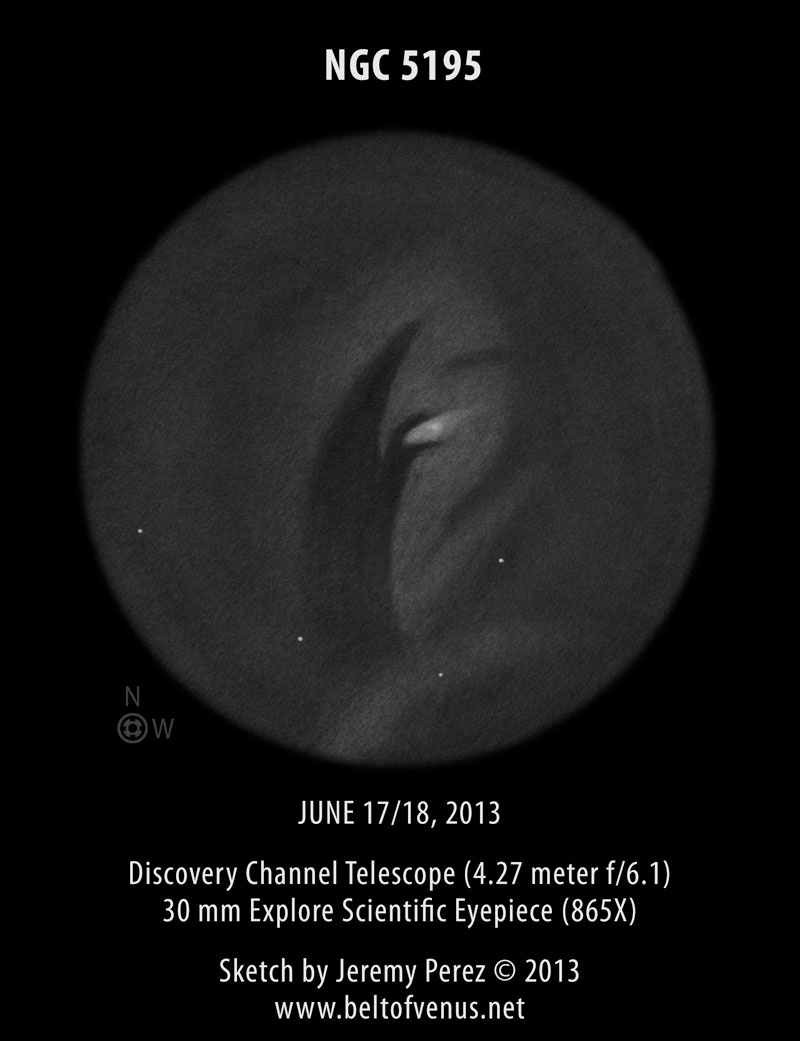 Once we hit the Ring Nebula, I wondered whether the central star would be an easy catch—and…not even a contest. The central star was bright and clear, and three more stars were visible, enmeshed in the nebula. The edges of the nebula had a furry appearance, which is difficult to depict in the sketch at this size, since it’s similar in scale to the texture of the paper which shows up through the rest of the drawing. Tom noted some subtle red around the outer fringes of the nebula that I didn’t notice while focusing primarily on structure. 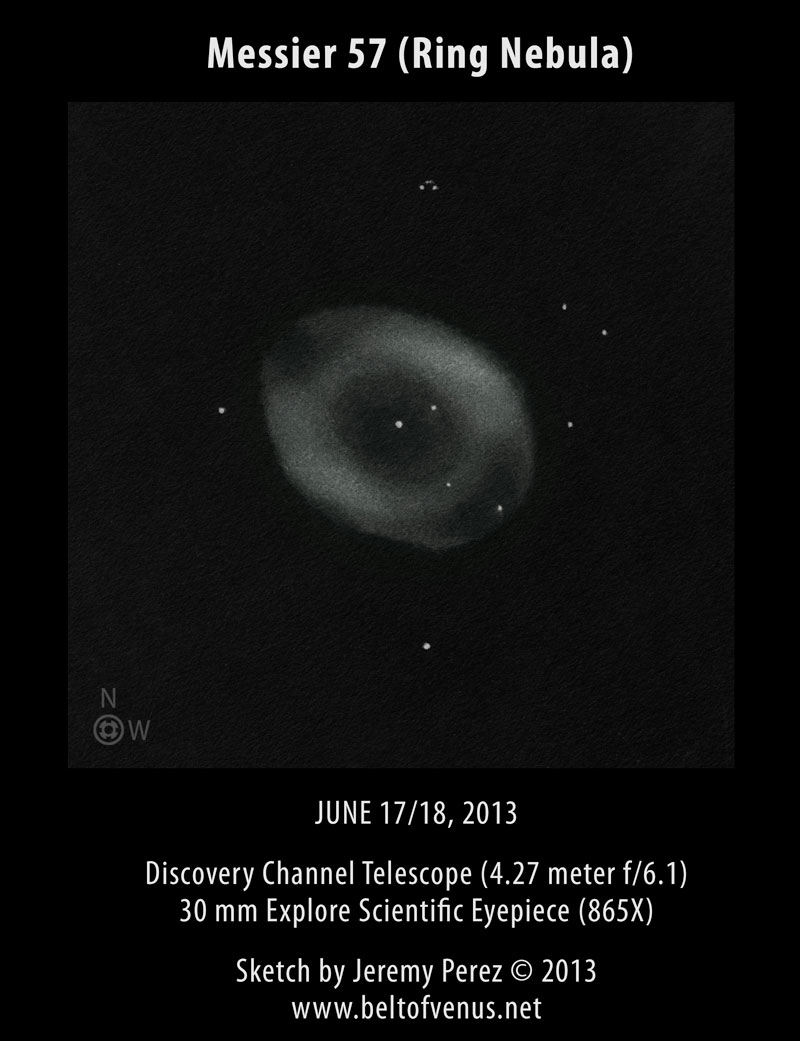 The view of M13’s core was a swarm of distinct stars, many of them orange in color. At first it was like seeing through the cluster. But I started to get a glimpse of what looked like stronger, unresolved luminosity toward the center, and some patchiness to it. 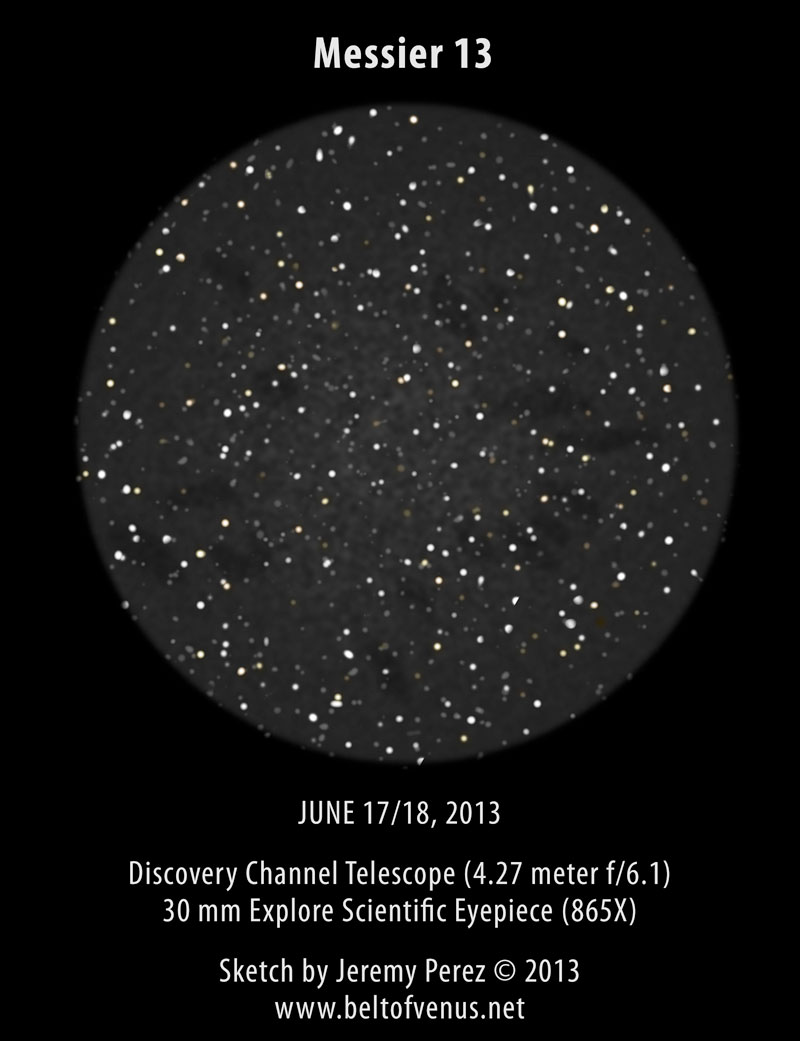 Up next are a trio of complex planetary nebulae. It’s unbelievable how much detail is available in these stunning objects. 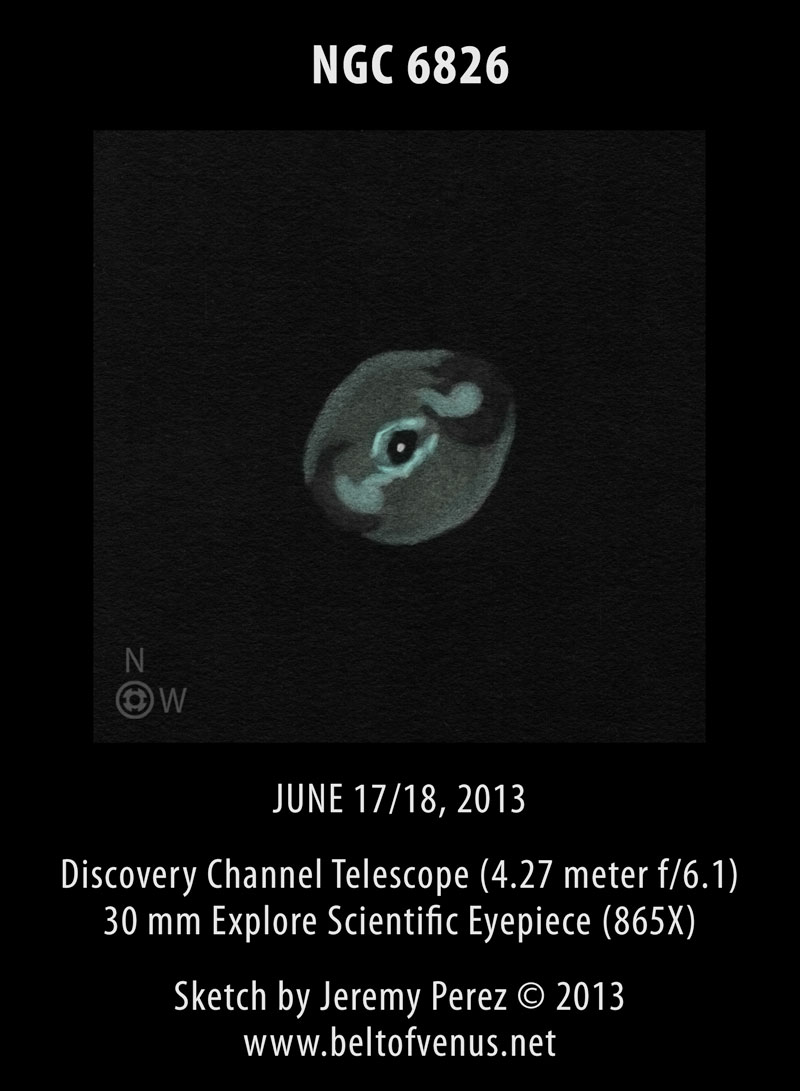 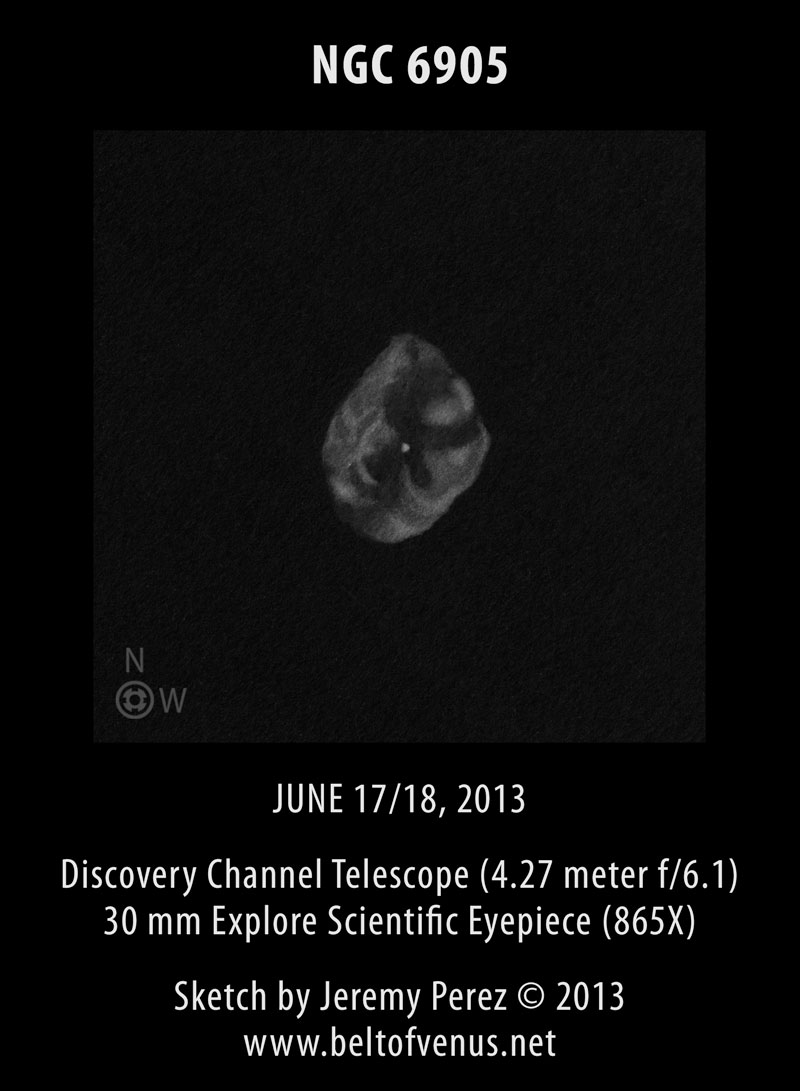 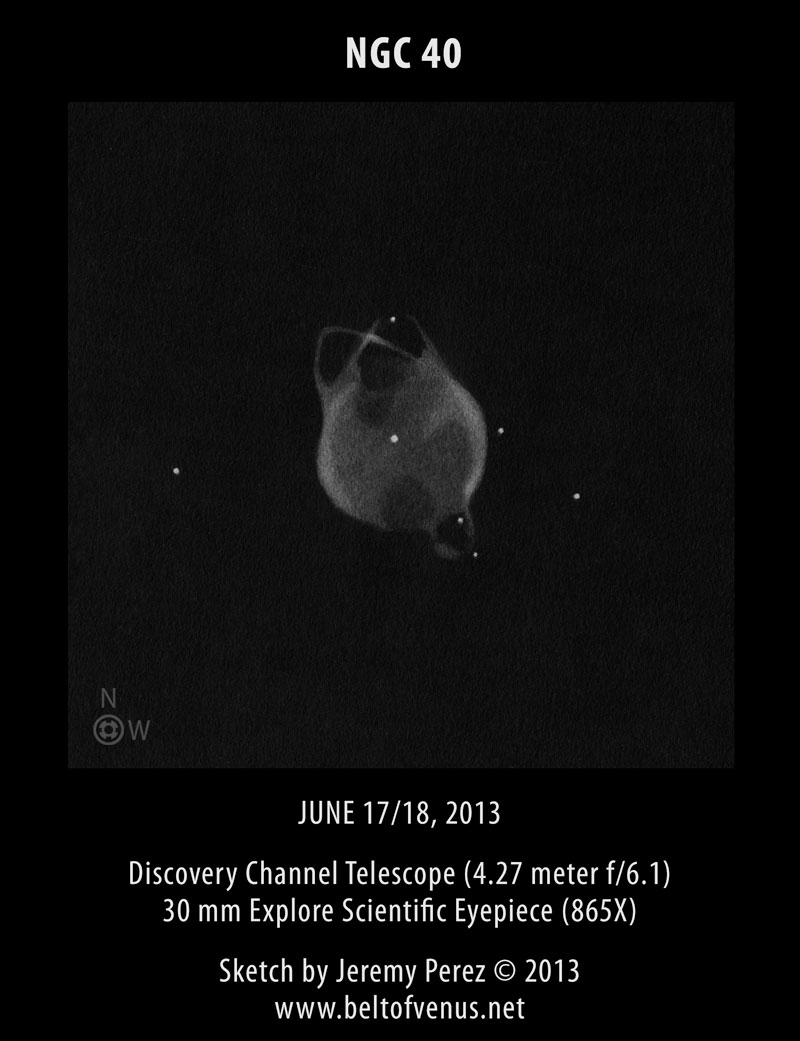 I had an opportunity to make a request for one of the objects we would view, and chose the Egg Nebula. What a privilege to witness energetic stellar dynamics, seemingly up close and in person. I could visualize a heavy disk of material hiding the brilliant central star while jets and bubbles of expelled material glowed brilliantly, sculpted with geometric precision. Informed by Tom’s suggestion about this object a few years ago, I brought out the polarizing filter and was pleased to see that it responded by dimming noticeably when the filter was rotated to a specific angle. 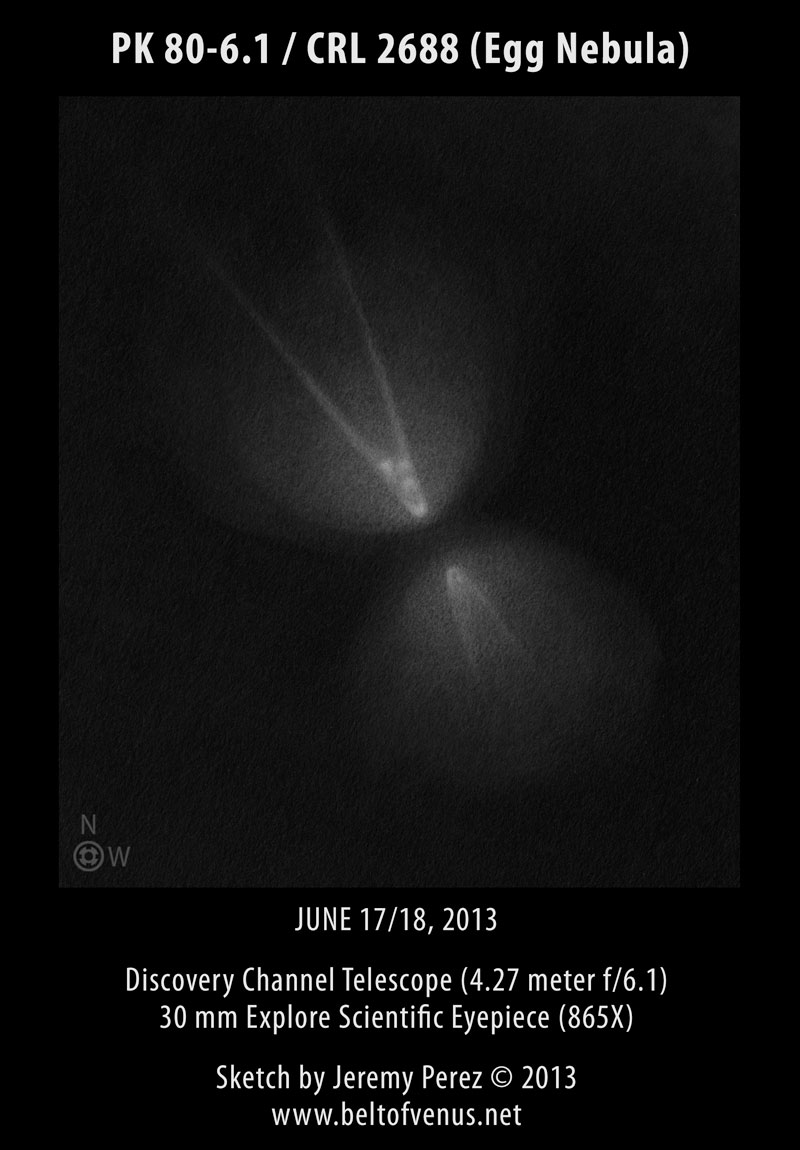 At one point during the observing run, the group pulled up Pluto. I took that opportunity to run outside and grab some shots of the dome against the sky.

Delphinus leaps overhead as the DCT slews to its next target 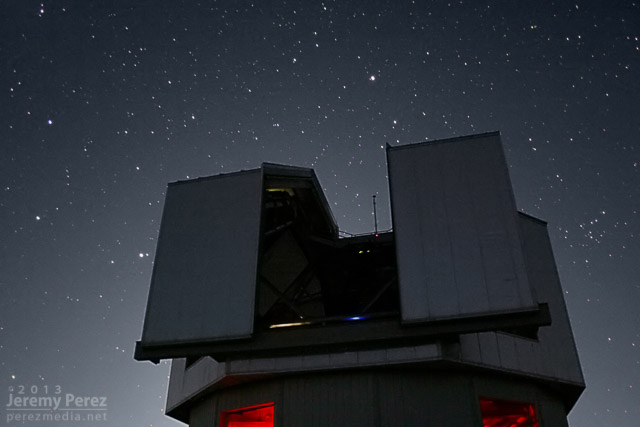 Moonglow washes over the DCT

Jennifer was also gracious enough to grab some shots while I was up on the ladder working up some sketches. 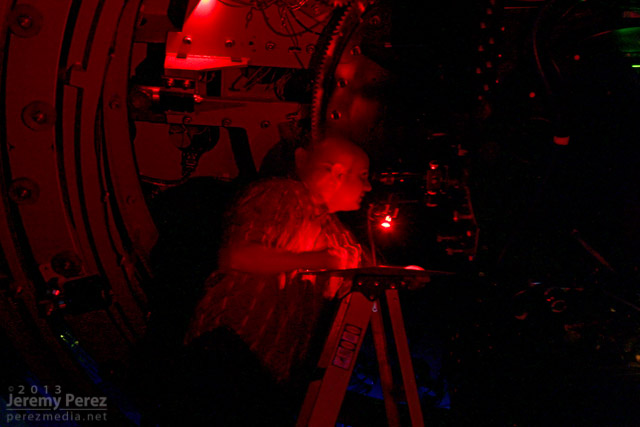 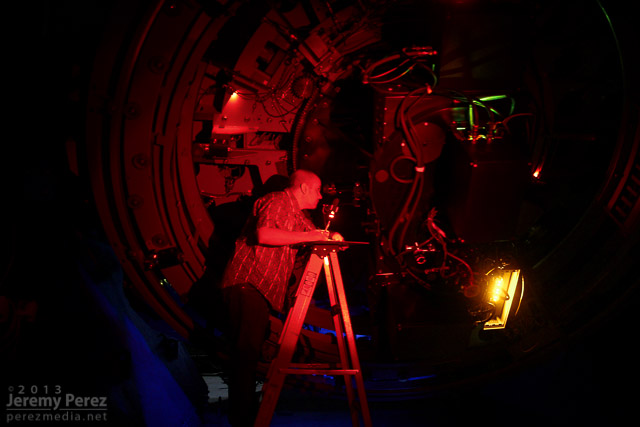 Sketching at the eyepiece of the DCT (exposures by Jennifer Polakis)

The flood of data that will start rushing in from the DCT will help refine our understanding of the universe, but I’m grateful we had a chance to connect the raw sense of wonder that inspires curiosity about what makes these powerfully beautiful objects tick. 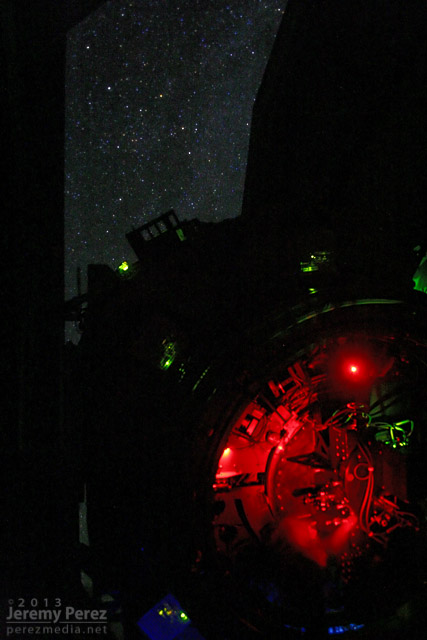 The Summer Milky Way is framed by the main dome shutters.

3 Replies to “An Evening with the Discovery Channel Telescope”