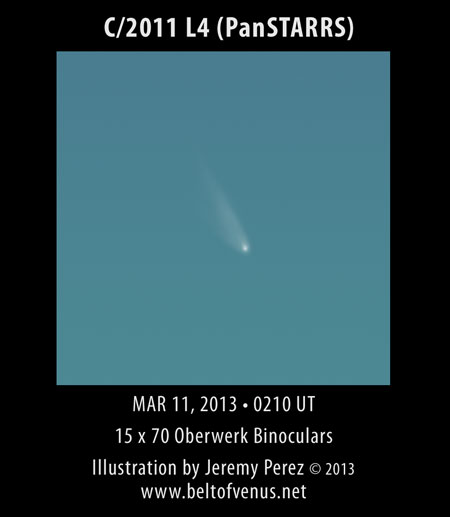 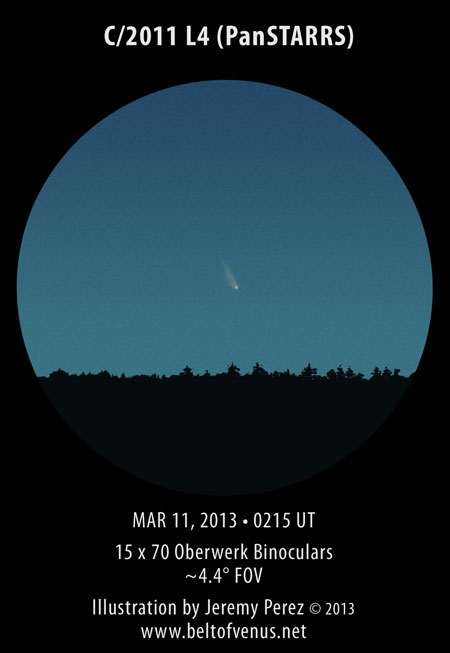 After weeks of putting on a nice show for the southern hemisphere, PanSTARRS finally drifted into view for northern observers. We had a crystal clear sky for dusk this evening and I found a spot with a good view to the west on McMillan Mesa.

The Belt of Venus rises to the east of my makeshift observing spot. 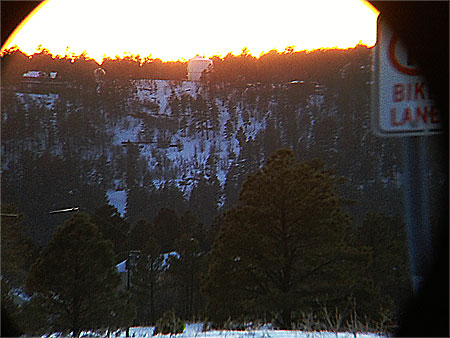 Binocular view of Mars Hill and the Lowell Observatory Clark Dome to the west.

The comet finally came into view about 7:00 PM with the sun 7 degrees below the horizon and the comet 6 degrees above. It was a beautiful white fan over a gray-blue sky. The central condensation appeared elongated with the brightest section of the tail on the right (north) side. There was a hint of a fainter, shorter tail on the left (south) side. I roughly estimated overall visible length at around half a degree. I tried spotting it naked eye, but couldn’t confirm a couple suspected glimpses.

While making sketches, I had a chance to share the view with a couple people who pulled over to take a look, including Kevin Mullins, planetary science professor at CCC. I also suspect Bill Ferris was just parked a couple hundred yards up the road.

As the comet began to set behind Mars Hill, it took on a ruddier color and shared an interesting, overlapping view with passing aircraft. As good as it looked through binoculars, it’s got to look amazing through a telescope. So I’ll have to try that next.