There is impressive video coming out of Russia from a meteor airburst that shattered windows and injured hundreds. The entire object did not impact the ground at hypersonic speed—rather it disintegrated/exploded high in the atmosphere. These fearsome chunks of rock are all over the place out there—coincidentally, asteroid 2012 DA14 is making a very close pass today.

Here’s to the near earth object surveys! I wouldn’t mind getting some advance notice if we needed to bug out of town to avoid an imminent impact 🙂

This dash-cam video shows the full path of the meteor. I’m trying to imagine driving to work and seeing this happen before my eyes. You have mere moments to wonder whether it’s going to detonate and obliterate you and everything around you, or simply blow out a few thousand windows as you witness the event of a lifetime.

The first 30 seconds of this next video show the surprise arrival of the blast wave. It’s pretty sobering. You grab your camera to film this awesome smoke trail that just tore into the sky overhead, and then BAM! glass flying around and car alarms going off…WOW.

This next page holds quite a few images and videos of the airburst and some of the damage (warning, lots of images and it’s getting hammered pretty hard so the load may be slow): http://zyalt.livejournal.com/722930.html

On the topic of NEOs, here is a photo of the LONEOS dome I shot a few years ago on Anderson Mesa (LONEOS = Lowell Observatory Near Earth Object Survey). At that time, they were still scanning for NEOs from the site. Brian Skiff gave me a tour of the dome one night, showing that evening’s survey in progress. 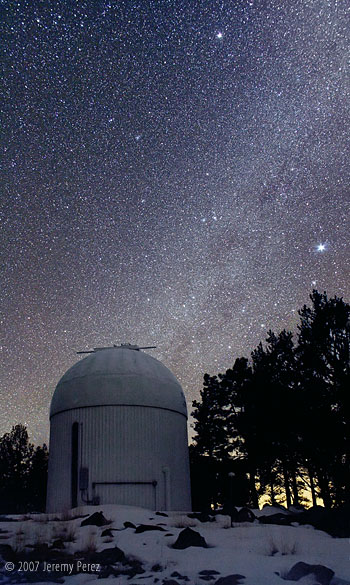 And while we’re at it! Berringer Crater, just a bit down the road east of here is a pretty stark reminder of what happens when these things make it to the ground at full speed.