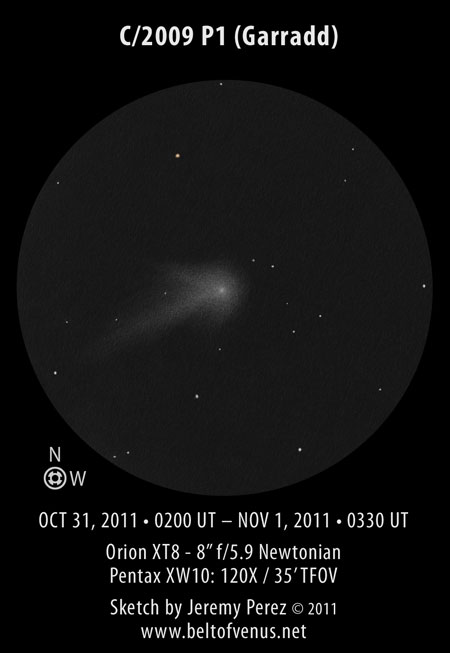 I enjoyed a very nice view of C/2009 P1 (Garradd) tonight. It’s been too long since I’ve gotten out for a recreational observation. The coma was moderately condensed with distinct elongation to the southeast. Further scrutiny revealed a prominent tail about 10 arc seconds in length pointed to the southeast at a PA of 115°. The south edge of this tail had a more abrupt spine while the north edge was softer. At a northeast PA 67°, a shorter, more delicate tail drifted about 5 arc seconds from the central condensation. Overall, there was an impression of a diffuse hood draped across the northwest side of the coma.

At times, I thought I detected the slightest hint of green in the coma, but I wasn’t certain enough to include it in the sketch. The warmly colored, ninth magnitude glow of TYC1559-1174-1 decorated the north edge of the view. I looked for evidence of the comet’s motion 90 minutes later, and there appeared to be some slight drift to the northwest. However, I hadn’t plotted the star field with enough density close to the coma to estimate the apparently slow motion with enough accuracy.