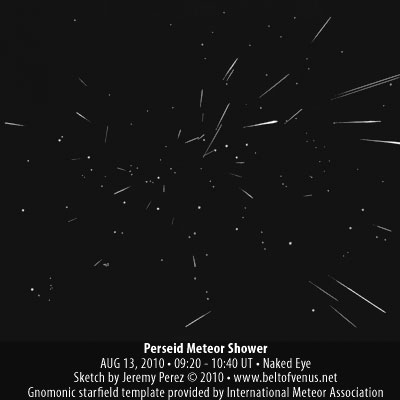 As much as I resist getting up early for an observation, this one was worth it. The 2010 Perseid Meteor Shower put on a great show. Over the course of an hour and twenty minutes, I plotted 40 meteors. In total, I actually glimpsed about 3 times that number, but many fell outside my sketch area, or happened in rapid succession and I couldn’t plot them. Out of 40 in the sketch, only 32 appear to coincide with the Perseid radiant in position and trail length.

After finishing the sketch, I attempted some photography. I saw about 10 meteors cross the image area while shooting, but they were too faint to rise above the air glow and sensor noise. I did get to see a brilliant fireball just as dawn was brightening the sky. It left a glowing trail that slowly twisted and faded in the upper atmosphere.