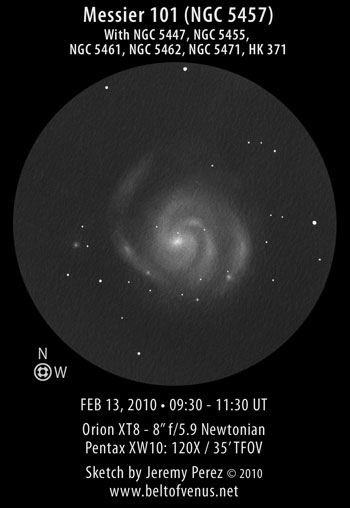 Nearly a year ago, I collaborated with Eric Graff to observe as deep into Messier 101 as we could. I didn’t end up completing the observation. Nine months later, I finally got around to it. What a beauty! As usual, it’s a subtle beauty, but the compiled moments of structure build up to a spectacular observation. I was pleasantly surprised to find three spiral arms lined up concentrically in the southwest quadrant of the galaxy.

I eventually spotted six H II regions. NGC 5447 was the first one I spotted, at the southern tip of the outer, western arm. It hovered just south of an overlapping field star. NGC 5461 and 5462 showed up next as softly brighter knots in the outlying eastern arm. Along the way, I had already plotted NGC 5455, NGC 5471, and HK 371 as stellar points. After finishing most of the sketch, I went to my Atlas of the Messier Objects (Ronald Stoyan), and compared the sketch to the detailed diagram of M101 in the book. After seeing the last three H II regions plotted as part of my star field, I returned to the eyepiece to examine them a little closer. NGC 5455 and 5471 did indeed have a softer structure, so I adjusted the sketch to convey that. HK 371 appeared stellar no matter what.

The far, outlying northeastern arm was very elusive, but I was able to re-acquire it as it flitted into view periodically. So far, I have not been able to find another sketch that shows this structure—let me know if you run across one! 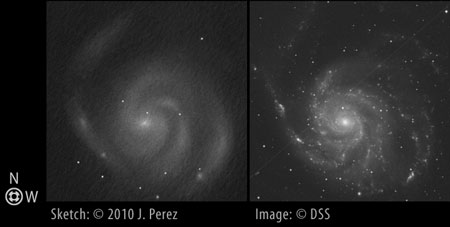