I said I was going to try this again. Things worked a little better this time (including remembering to check my ISO setting). I arrived early (12:30 AM 🙂 at Cinder Hills Overlook to work on an observation and sketch of Messier 101. Orion and Sirius would be in good position over Sunset Crater between 12:30 and 1:30 AM. After getting the series of shots I wanted, I couldn’t resist shooting another set to the northwest showing Orion, the Hyades, and the Pleiades all setting behind the hills and trees. 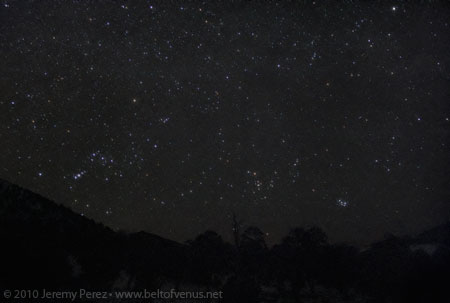 Mars, Procyon, and Sirius line up over Sunset Crater

I got three shots into that series before Rigel winked out behind the mountain. At that point, I noticed that Sirius, Procyon and Mars were making a brilliant alignment over the peak of the volcano. So I worked on a vertical series to capture them.

Mars, Procyon, and Sirius line up over Sunset Crater

Processing one set of images is hard enough. Adding a second and third gave me a workout. It was a much needed workout too, since it forced me to refine my process. I made some improvements on the second image, and then again on the third image. By that time, I felt I had to go back and re-do the first and second again.

I’ve felt pretty confident handling stacking and compositing for sky and foreground. The processes I find challenging are:

Briefly, some of the solutions I arrived at:

I’ve still got a lot of improvement to do, but with the system I’ve scripted out, I have high hopes it will go smoother on my next attempts.