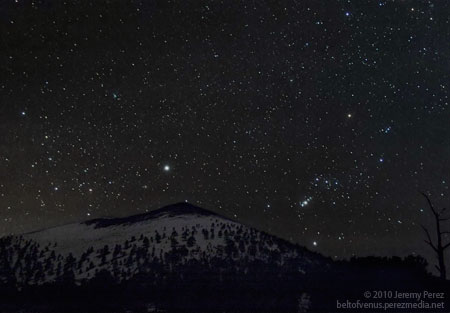 While observing at Sunset Crater a couple weeks ago, I was struck by the beauty of Orion and Canis Major setting over the snow-covered volcano. So I took a break at about 3 AM to take some photos. It was a spur of the moment decision, so I didn’t get everything right. The photo above is a combination of 5 30-second shots aligned and stacked for the sky, and a 5 minute exposure of the foreground. I adjusted exposure on both sky and foreground to try and convey the relative brightness of both as naturally as possible. The moon wasn’t out, so the snow is lit by starlight.

A couple of the things that went wrong–
I was in a hurry to get the shot before the bright stars in Canis Major’s legs dipped behind the peak, so I rushed through focus, and think I could have done better there. I also goofed up and didn’t check my ISO setting…which was set to 200. D’oh! If I had set to ISO 800, I think I could have pulled the Milky Way out nicely. As it is, the Milky Way barely breaks through some severe horizontal banding noise, so I had to leave it alone. It’s all about signal to noise, and I didn’t grab enough signal. I did have the foresight to shoot in RAW, so I had otherwise decent data to play with. I could probably do better with the processing, but astro photos are really hard to process–especially when sensor noise wants to demolish the sky with every tiny curve move. So I called it good where it’s at.

I do have plans to shoot this again when I head back out there in a couple weeks to work on a sketch for the May column. There should still be plenty of snow up there to catch the starlight. Also: ISO 800…ISO 800…ISO 800…