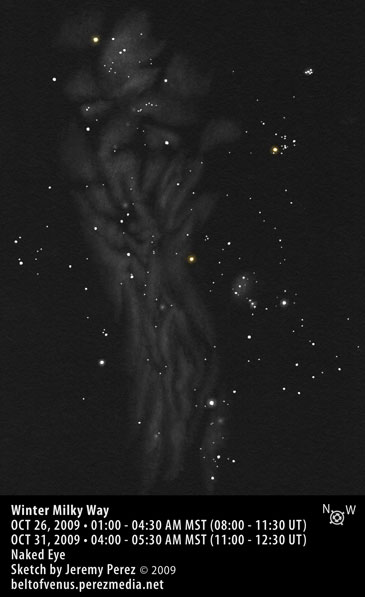 Sketch of the Winter Milky Way (Auriga to Canis Major)

From a true, dark sky, nothing can compare to a naked eye view of the Milky Way. During the winter months in the Northern Hemisphere, we face away from the furiously busy core of our home galaxy and look outward, through its more tenuous periphery. Despite being more delicate, this slice of the Milky Way is still rich with structure.

From Sunset Crater National Monument, the dizzying heights of this misty waterfall cascade through Auriga, past Taurus and Orion, before drenching Monoceros and Canis Major in a spray of rippling starlight. You can recall the splendor with simple, fond memories; flowery prose; bold photos; or you might try to embrace it with a sketch. You know what I did. I got a little ambitious actually, and ended up trying to bottle 80 degrees of sky onto 8 inches of paper.

A cartographer I am not. Pressing such a large section of the sky onto a flat sheet can be a surprisingly ornery process. After several erasures, I had my bright stars plotted and worked my way through the constellations and then the fainter stars they encompass. This took up my first early morning of observing. On the second morning, I worked my way down the Milky Way from Auriga to Canis Major. Auriga was at culmination when I started, and Canis Major was reaching its apex when I finished. Along the way, I was able to enjoy the delicate clumps of several open clusters. More were certainly within grasp, but I had to leave those for another session at some point in the future.

The overall structure in the sketch is rather blunt compared to the subtle glow the Milky Way gives in person. However, I feel like I know this piece of sky much better, having tried to reproduce its fluttering streamers of light and dark. I’m looking forward to seeing its familiar face again very soon.