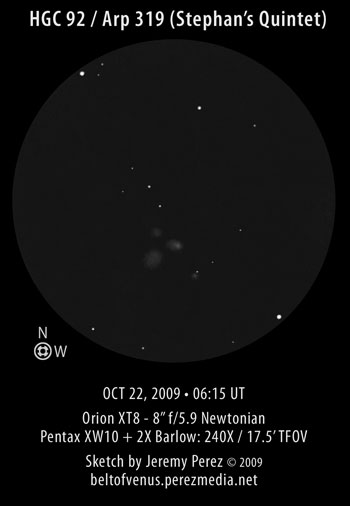 Move mouse over sketch above to view labels
Click image for larger version.

This is a tough observation from home. The soft patches flickering in the vicinity of the cluster were frequent, but difficult to pin down. NGC 7318 and 7320 were the most readily visible. I actually picked up a few episodes of condensation in the western half of NGC 7318. NGC 7319 was very difficult–it made about a 150 degree angle with the two stars to the north and about the same distance as the two stars are from each other. NGC 7317 was difficult in its own way, bound closely to a distracting star. But it consistently flickered into view, separating itself just to the southeast of that star. 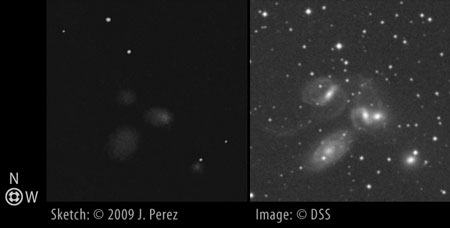 Stephan’s Quintet was at the center of a debate about the validity of galactic redshifts as a means of determining distance to objects and structures in the universe. Photographic images of the galaxies clearly show some of them to be interacting gravitationally with each other, pulling tails of debris from each other. Furthermore, 4 out of 5 of the galaxies have a similar redshift of 6000 km/sec. NGC 7320, however, has a much smaller redshift of 760 km/sec. Some have pointed to debris and tails around NGC 7320 as evidence that it must be a member of the group of galaxies, so the difference in redshift couldn’t be a reliable indication of distance in the universe. However, recent imaging by the Hubble Space Telescope revealed individual stars, clusters and nebulae in NGC 7320 that wasn’t visible in the other galaxies, thus placing it much closer than the other galaxies, in agreement with its redshift value. 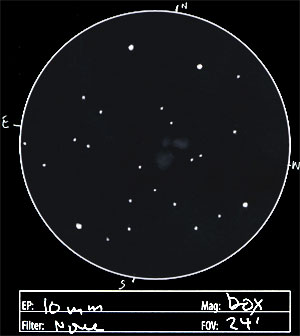 Observation Notes:
Ah yes, Stephan’s Quintet. I’ve had a goal of seeing this enticing collection of galaxies ever since I first saw it through Bill Ferris’ 10″ reflector. I remember thinking how faint the galaxies were through the scope at the time, and being pretty satisfied that I was able to make out all 5 of them. Over the past year, I hoped that my observing skill had improved enough to have a slim chance of seeing them in my 6″ scope.

After a fantastic evening observing with my family at the Cinder Hills Overlook site at Sunset Crater National Monument, the family went home to get some shuteye. I decided to give this galaxy cluster a try. I had tried to find them from my front yard the week before, but that search ended in utter failure. This time I had fantastic skies to work with. I also had the precise location printed out for reference. The galaxies would be located in the southern quadrant of a keystone-shaped asterism of stars. As I pored over this view in the eyepiece, that region of the asterism gradually revealed itself to be a bit lighter than the surrounding field, and somewhat mottled. It took a lot of searching, deep breathing, and concentration to slowly discern the faintest hints of soft light that were hovering in and out of visibility.

The first patch of light to give itself up was the southern soft oval in the sketch, NGC 7320. The next to reveal itself was a smaller, western oval of light that turned out to be the combined form of NGC7318A and NGC7318B. I made a note in my journal that this smudge seemed to split in two on a couple occasions, but not consistently enough to confirm. Whatever 😉 Finally I got the very slimmest hint of a soft smudge northeast of the first two sightings. This one was harder to pin down, but something was there, and it turned out to be NGC7319. I did not pick up on NGC 7317, but I did plot a star at its position (GSC 0274301548). If I had any chance of picking up this galaxy by itself, the 12th magnitude star apparently outshone it enough to hide it from my prying eyes. I didn’t plot every star I saw, mostly enough to verify the sighting later. The faintest I plotted was GSC0274301406 with a photographic magnitude of 13.75.

This was a very tough observation–on par with the Horsehead Nebula observation, but it was really rewarding to have spotted members of this unique cluster of galaxies.

Eric Graff observed and sketched all five members of Stephan’s Quintet with a 6″ f/6 newtonian. It was one of the things that helped motivate me to give the observation a try in my 6″ f/8 scope. The following link will take you to his sketch of Stephan’s Quintet. Thanks Eric for the sketch and permission to post it here.

Jeff Medkeff provides a very interesting description of his experience sketching this galaxy cluster with a ten inch scope:Stephan’s Quintet.