Just 2 days after a great pass on Saturday night, the ISS made another flyover at an even higher altitude (86 degrees). Interestingly, this made it easier to track, since the dob required very little rotating as I followed it up and down. I managed to navigate Dobson’s hole without threat of upset this time. I also chose to manually fire the shutter instead of using the IR remote release. This gave me better control over timing, and out of 51 exposures, 38 contained the ISS. A few of the images contained some nice detail on the radiators–the grid pattern actually showed! The strip below shows 3 of the better frames. The top frame is on approach, and the bottom two are on egress.

I made an attempt to label the structures visible in one of the images as shown below. If anybody is better at ID’ing than me, I’m interested to know any labels that are incorrect. 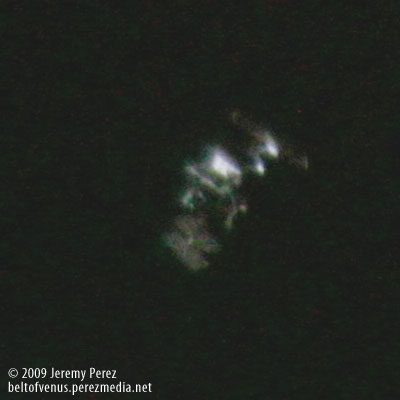 Because I was able to collect so many images, I was also able to create a short animated gif showing the space station on approach and escape: ISS Animation (540 K)