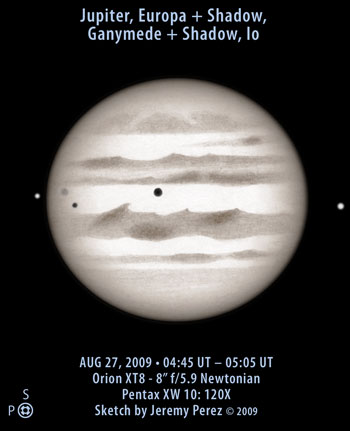 I enjoyed a beautiful dance between Jupiter, three moons and two shadows. Europa began to emerge from the preceding limb just as Io emerged from Jupiter’s shadow. At first, Io looked like a faint star, but it gradually brightened as it became fully lit. Ganymede was visible just south-preceding Europa’s shadow in the equatorial zone. Ganymede’s shadow was stark and nearly centered when I got my first look. By the end of the observation, Ganymede itself was exiting, leaving the three moons still bound closely to Jupiter.

A strong, dark spot was visible in the south temperate zone and I noticed two light notches in the south polar region. The whole scene was stunning. Even Harrison was impressed by Ganymede’s strong shadow. Tom Polakis prepared an excellent image of the view at the same time I was making the observation. Take a look here: Jupiter AUG 27, 2009 – 04:42 UT