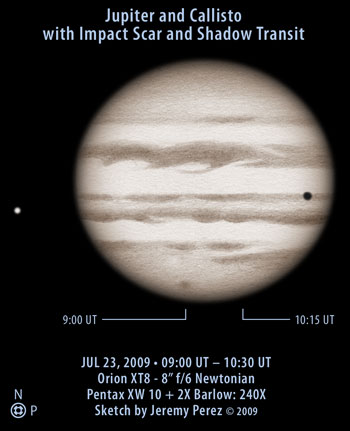 The impact feature is still hanging on and was readily visible through my 8 inch Dob at 120X and 240X. The best part was the addition of a beautiful shadow transit with Callisto hanging just outside Jupiter’s following limb. It also provided a nice contrast for comparison of the two spots. Callisto’s shadow was strikingly black, while the impact scar appeared more as a soft feature that seemed to take on the brownish color of the surrounding clouds. I spent more time getting a feel for the impact site itself, and did detect a horizontal elongation and slightly condensed appearance.

I had a couple moments of incredibly good seeing that showed up a lighter patch north of the impact scar and corresponded well to the position of a white spot in the area. I did not detect this as a hard oval, just as a subtle brightening in the area. Midway through my observation, high clouds moved in and foiled my attempts to finish up detail on the preceding edge before it rotated out of view, so the equatorial belts are a little plain in that part of the sketch. I finished the observation just as Callisto was dipping into Jupiter’s profile. What a great view!