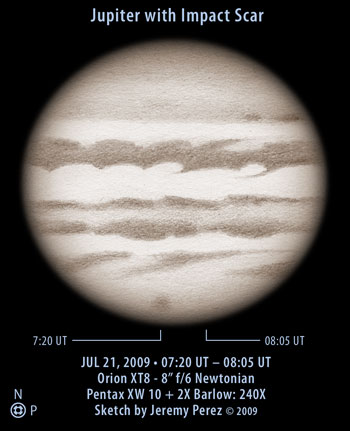 Sketch of Jupiter with Impact Scar

On July 19, 2009, amateur astronomer and planetary imager, Anthony Wesley discovered a striking new feature on Jupiter. A dark spot had suddenly appeared in the south polar region. Although it might have been a new weather feature, it actually appeared very similar to the impact scars created when fragments of comet Shoemaker-Levy 9 struck Jupiter in July of 1994. Quick analysis by professional observatories confirmed that this new feature was indeed an impact scar.

Sleep deprivation and heavy clouds prevented me from attempting it visually on the morning of July 20th. But tonight I was able to spend time with Jupiter in hopes of seeing the feature as it transited a little after midnight local time (July 21). As the scope cooled down, I worked on adjusting my eyes to details in the cloud belts. By 12:10 AM, the seeing was improving, and Jupiter had rotated enough to make it clear that I was detecting a soft, dark spot near the southern pole. Through our own fluttering atmosphere, I was actually seeing the debris cloud of an immense impact on Jupiter that had happened perhaps as recently as two days ago.

Over the next 45 minutes, I sketched the position of the impact scar, and all the other features I could detect. In that time, the spot transited Jupiter and crept along steadily with planet’s rapid rotation. At times I’ve wished that I had taken up observing sooner so that I could have seen Shoemaker-Levy 9 pepper Jupiter with my own eyes. And what do you know, 15 years later, it’s been hit again.