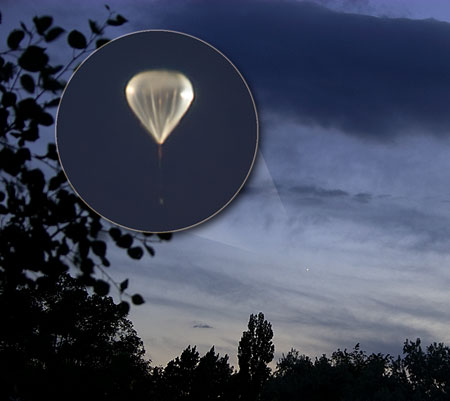 One evening, earlier in June I read an email alert that a scientific balloon was crossing central Arizona. I ran outside with my family to check it out. To the naked eye, it was brilliant against the cloud-streaked twilight and was definitely non-stellar in appearance. We got a great look at the balloon and payload through 15 x 70 binoculars. At one point it went through a striking color phase with a delicate pink base and yellow-orange top. I ran in, grabbed the telescope and camera. The great color was gone. but it still cooperated for a few photos. The magnified inset in the image above is a stack of 7 photos at 1/30 and 1/60 sec, ISO 1600 with a Canon EOS 300D and 2X Barlow through an Orion XT8 Dobsonian (8″ f/5.9).

After Spaceweather.com picked it up, I got a request from Tim Printy to use the photo in his July-August 2009 Skeptical UFO newsletter, SUNlite. A year or two ago, I ran across a web article he wrote about the Phoenix Lights and was very impressed by his thorough coverage of the situation. (It synced up nicely with another article in the Phoenix New Times.) I get frustrated by the Conspiracy Theory method of supporting an argument–which in my experience is a robust pillar of the UFO experience. In my time under the gorgeous Northern Arizona night skies, I’ve seen a number of unusual and sometimes unexpected sights. Any of them could be taken for suspicious alien activity if a person wanted to, but so far, they’ve all had astronomical and technological explanations. A few of my favorites:

I’m looking forward to the next bizarre sight under a beautiful, dark or twilight sky. Hopefully it won’t involve any lost time or probing, but if it does, I hope I’m lucid enough to record a detailed sketch. You’ll see it here first & I’ll have my imaginary tail between my legs.