I met Steve Coe for an enjoyable evening of deep sky observing at Anderson Mesa Saturday night. Steve brought his 6 inch f/8 Celestron refractor and a list of galaxies in Corvus that he wanted to polish off. I had a pending appointment with M101. Steve brought along a nice batch of sketches that he had published in Amateur Astronomy magazine and which were recently returned to him. It’s always a pleasure to browse somebody else’s sketches, and I especially enjoyed checking out his excellent nebula drawings.

While we waited for the sun to set, we noted astronomers making their way to the observatory domes down the road. Brian Skiff saw us sitting there and stopped for a visit. We learned that LONEOS is no longer hunting down new Near Earth Objects. Instead, they are taking magnitude readings on existing NEOs to evaluate their rotation periods and axes. He mentioned that lately, he has also been operating the 24-inch Clark Refractor during visiting hours at Lowell Observatory. He has been trying to increase the number of people who have seen Sirius B. The Pup has become easier to detect as separation has increased to greater than 8 arc seconds. Viewing during twilight helps offset the overpowering glare of Sirius A. So far, he noted that about 100 out of 200 visitors were able to see the faint companion. During the brighter daylight hours, he has been training the telescope on Saturn so visitors have something interesting to look at. 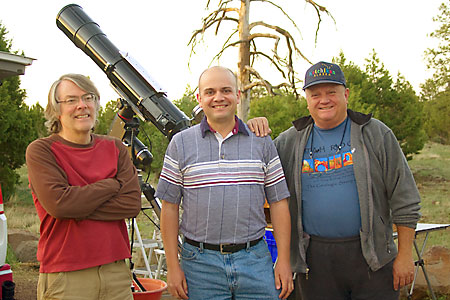 Brian Skiff, myself and Steve Coe at Anderson Mesa

For the last few days, we have been seeing some weak tropical moisture filter in. By mid-May, we usually get a brief taste of the monsoon to come. We hoped the clouds would clear out after sundown. They weren’t very heavy. But they were pretty persistent. We hunted for sucker-holes and bright objects while we waited. Saturn was in a good spot, and we compared views through our telescopes and different eyepieces. Steve lent me a 5 mm Vixen Lanthanum eyepiece, and it pulled up an excellent view of Saturn through my Dob–much better than the barlow view I usually get with one of my 10 mm eyepieces. It was very crisp. I may have to reconsider my barlow strategy.

By about 9:30 pm, the clouds dissipated very rapidly and we were able to hunt down our targets for the evening. I got to work on a sketch of M101. I worked at 120X with my Pentax XW10 and had an excellent view. The field has a healthy star population to deal with, and that took quite a bit of time to address before I could begin analyzing the galaxy itself. Subtle hints of broken spiral arcs seemed to be everywhere. Amid those arms were brighter patches–the HII star forming regions I was particularly interested in. They preferred to reveal themselves along the southern half of the galaxy.

Because I’m not very good at conversing and drawing at the same time (the whole chewing gum and walking thing 🙂 I didn’t complete the sketch. There is still quite a bit more begging to be extracted, particularly closer to the core, and along the northern outer half of the galaxy. I did compare the sketch-in-progress to a chart in the Atlas of the Messier Objects and noted that I had picked up 6 HII regions so far. Three extended segments (NGC 5447, NGC 5461, NGC 5462) and three others that I had mistaken for stars (HK 371, NGC 5455, NGC 5471). I’m hoping to finish the observation next weekend if possible. I’ve been having a great time with the Spring Galaxies this year!

After calling time-out on the sketch, I took a few minutes to grab some photos of the Milky Way rising over the trees. Although they’re more colorful, the images can’t even compare to the luminous quality of viewing that majestic sight in person. 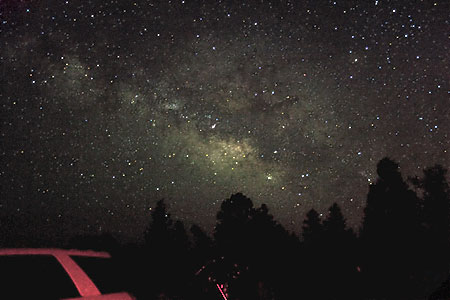 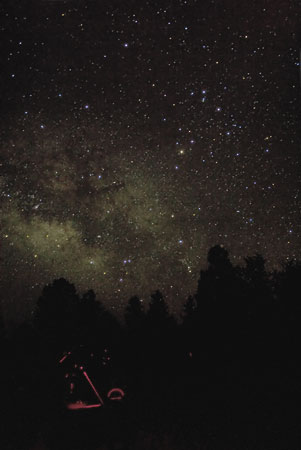