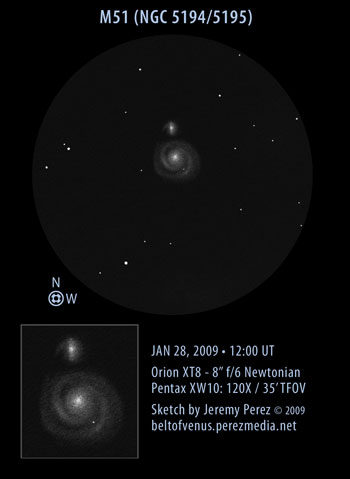 This amazing galaxy pair deserves much more attention than I gave it nearly 4 years ago. This time, I had the benefit of my 8″ Dob and Pentax 10XW to help improve the view from the dark sky at Sunset Crater National Monument. A first glance revealed the two glowing galaxy cores to be surrounded by unevenly illuminated halos. The primary galaxy, NGC 5194, was filled with beckoning structure. It was subtle, but it responded well to averted vision and gradually over the course of about an hour of sketching, it revealed a beautiful spiral structure. The most prominent areas in NGC 5194 were brighter arcs to the southwest and east-southeast. Less prominent whisps revealed themselves next, curving around the external periphery of the galaxy. Some of the inner portions of these arcs took more time and attention to discern, but the more I glimpsed them, the easier they were to re-acquire. It was fascinating to see a kink in the outer southeast arm take shape as I built the sketch up.

NGC 5195 also had some nice details to explore. It possessed a bar-shaped core that pointed slightly east of the core of NGC 5194. The western half of its halo appeared brighter, while the eastern half displayed a comma-like arc curving outward from its northern side. This comma extension is created by a heavy dust lane reaching out from it’s larger neighbor, and is what forms the visual bridge between the galaxies so often seen in photographs. While this extension, and the eastern outer arm of NGC 5194 both reached out toward each other, I could not detect an actual connection between them.

The view hinted at even further mottling within the arms themselves, and I think that will be a good reason to return to M51 again in the future for an extended visit and see what else I can pull from it. Until then, I’m really pleased with what a great galactic feast the Pinwheel served up.

If you subscribe to Astronomy Now or occasionally pick it up at the book store, check out the April 2009 issue. It contains an illustrated 2-page article I prepared that describes the observing and sketching process for this view of M51. I hope it’s educational, and I look forward to any questions, suggestions or criticisms on the column.

M51 is a spiral galaxy that is a member of a small group of galaxies including M63 and 6 other less prominent members. This group is estimated to lie about 37 million light years away (with a more recent estimate of 31 million light years from STScI). Under present theory, the pronounced spiral structure of the galaxy is due to an ongoing interaction with neighboring NGC 5195. This interaction would have disturbed gasses in M51, causing a burst of star formation in the galactic arms.

M51 was discovered by Charles Messier in 1773. The catalog description says, “It is double, each has a bright center, which are separated 4’35”. The two ‘atmospheres’ touch each other, the one is even fainter than the other.” William Herschel assigned NGC 5195 its own number (H I.186). M51 is the first galaxy in which spiral structure was discovered, in 1845 by Lord Rosse. His meticulous and beautiful painting of the galaxy gave rise to the moniker “Lord Rosse’s Question Mark”.

Supernova 2005cs was discovered June 27, 2005 by Wolfgang Kloehr, an amateur astronomer from Germany. It was mag 13.5 and rising at the time. It was classified as a type II supernova, based on analysis of its spectrum.