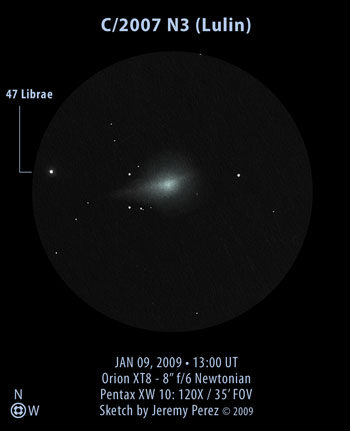 What does it take to get me out of bed at the abominable hour of 4 AM? Comet Lulin, that’s what! I’ve been hearing some good reports about it, and saw a fantastic photo of it by Karzaman Ahmad at Spaceweather.com. According to Tony Cook (Tonk) at CloudyNights, the comet’s orbital plane is closely aligned with ours and will result in a rather prolonged period of interesting tail geometry. The result is a potentially long-lived anti-tail appearance as the ion tail and dust tail fan out from either side of the comet.

It was my hope that I would be able to see this fascinating display this morning before the full and waning moon overpowers it for the next couple weeks. I arrived at Sunset Crater National Monument shortly after 5 am with the moon blazing away and lighting up the snow-covered landscape. The head of Scorpius was rising, and Antares was flickering with a rusty light just over the tops of the cinder cones. While the sky was still bright with moonlight, I shot a few photos of the landscape, and then set up my 8 inch Dobsonian.

The comet was a snap to find and readily pierced the moon-washed star field as a round glow with a nicely condensed core. I’d estimate the degree of condensation as 6. Initially, I saw probably about 2 arc minutes of the core region. The bright 6th magnitude star, 47 Librae anchored the east side of the field.

As the moonlight began to dwindle and the comet rose higher in the sky, more structure began to appear. Compared to the neutral gray background, the comet emitted a very slight aqua tint. A definite brightening proceeded eastward away from it at a PA of about 100 degrees. This extension (dust tail) was visible out to about 9 arc minutes from the core.

As conditions improved, the coma also appeared to blossom a bit more to a diameter of about 6 arc minutes. At this point, the brighter core took on a more elliptical shape that preferred to drag off to the east. On the west side of the comet, a much fainter extension (ion tail) emerged from the coma at a PA of about 290 degrees. A quick look at 240X showed the coma to be brighter along its southern half, perhaps due to the dust tail fanning widely behind and to the south of the comet. I didn’t spend time trying to compare the comet’s brightness to nearby stars, but it was definitely brighter than 8th magnitude M107–I’d estimate by at least 1.5 if not 2 magnitudes. That’s a very rough estimate, so don’t rely on it for anything. But if correct, that would put it around 6th magnitude, at the threshold of naked-eye visibility under a dark, transparent sky. I did not try to spot it naked eye, however.

The extended details I observed were very subtle and required much time spent observing with averted vision. Scope tapping, sweeping, and moving the core outside of the field of view on different sides, all helped to bring these structures into view. With strong moonlight, light pollution, or murky skies, they are likely to be invisible while the comet is so low. The central core however is quite bright and should be visible to some degree under poorer conditions.

The time between moonset and the beginning of morning twilight was fleeting, and the gradually improving view halted, and began to quickly deteriorate. I spent probably 15 minutes plotting the star field, then a half hour examining the comet for structure, and a final 15 minutes trying to eke out the last, faintest bits of detail. It was an hour very well spent. I attempted to track down the pairing of comet C/2008 X4 (Christensen) and M107 but was only successful in spotting M107. I wasn’t able to spend much time on that side trip, since I needed every bit of attention for Lulin, and I’m glad I made that choice. Hopefully, Lulin will be quite a bit brighter in two weeks when the new moon cycle returns and this comet’s beautiful features will be easier to detect, and rich with developing structure.

[Edit: See the following post for a comparison of this observation with a photograph by Gregg Ruppel: C/2007 N3 (Lulin) Observation Analysis.]