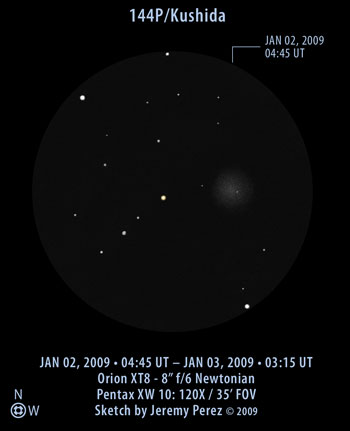 Move mouse over sketch above to view labels and different positions.
Click image for larger version.

Comet 144P/Kushida is riding high in Taurus now, but the moon is sneaking up on it. I observed it over the last couple nights and found it sliding past a linear arrangement of four stars. It appeared as a soft, evenly round disc with a degree of condensation of about 3. On Thursday night Jan 1/2, it was difficult to analyze for symmetry, since the core was resting within a few arc seconds of a 13th magnitude star. At that time, its diameter appeared to be about 3 to 4 arc minutes. I observed it again 2 hours and 15 minutes later that night and noticed eastward movement of about 1.5 arc minutes.

On Friday night, Jan 2/3, it had moved about 15 arc minutes to the east-southeast. The moon was brighter, and the coma appeared a bit smaller as a result. The coma still appeared symmetrical. It should still be fluorescing at 8th or 9th magnitude toward the end of the month as the moon swings back out of the way. Give it a look if you have the opportunity.