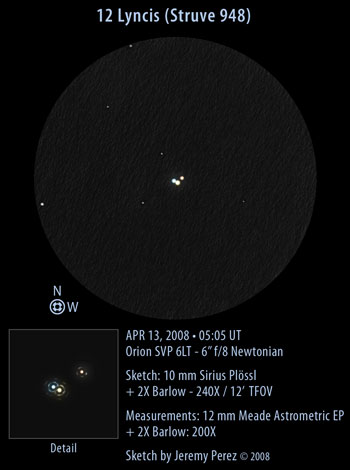 12 Lyncis was a great triple star system. Color contrast was very nice–the primary appeared pale yellow, with a pale blue secondary hugging it. The tertiary appeared to be dull orange. They made for a very striking sight at 120X and 240X.

I measured the A-B pair at 63 degrees with a separation of 1.5 arc seconds (based on diffraction rings) to 2.2 arc seconds (based on the astrometric eyepiece gauge). I figured I had severely misread or mislabeled the PA measurement in my notes after looking up the WDS value: 156 degrees. However, that was an 1828 value. A little more checking showed that this is actually a fast moving pair. A 1998 measurement showed 72.7 degrees, and Brian Workman’s calculator comes up with 66.13 degrees for 2008.3. Currently the A-B pair is orbiting clockwise at about .5 degrees per year. Not as fast as Porrima’s periastron motion over the last few years, but still notable. My A-C measurement of 310 degrees and 8.6 arc-seconds matched up nicely with more stable values from WDS, Alzner 1998 & others.