The way the contours of this galaxy danced and materialized with increased dark adaptation, averted vision, and patience was particularly enjoyable. When I first centered my telescope on the galaxy, it was easy to spot and appeared elongated with a strongly condensed core. With time spent at the eyepiece, the outer edges of the galaxy emerged, particularly with highly averted vision. Moving my eye around just outside the boundaries of the galaxy gradually brought portions of the western dust lane into view. I have tried to show this effect in the following animation (it runs for about 7-8 seconds before repeating).

Hopefully that illustrates in some way how an entire observation can be built up out of numerous smaller, detailed glimpses of structure. It doesn’t usually appear as a detailed composite view all at once.

To aid in refining the final sketch, I supplemented the shaded version with an isophote drawing that marked the shapes and boundaries of varying areas of brightness. This allowed me to clean up the shaded drawing, and to prepare an enlarged view that captured the structure I saw. 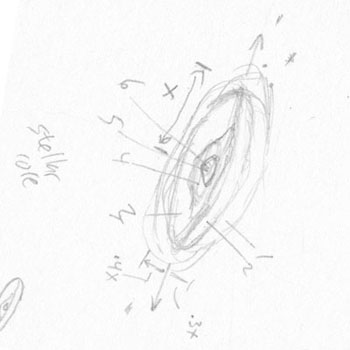 Below is the full observing record with the included sketches. Note that I initially wrote in a PA of 150 degrees, but later revised that to 165 degrees after more carefully assessing the angle of the galaxy compared to the West marker. 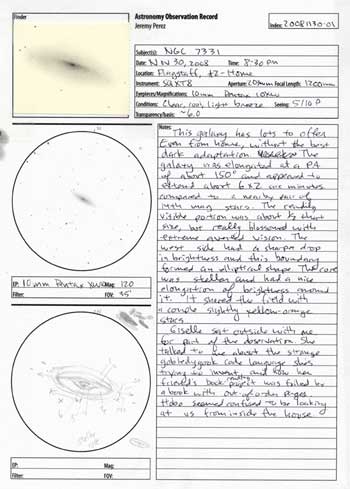 …which leads to the final digitized sketch that I posted last week: 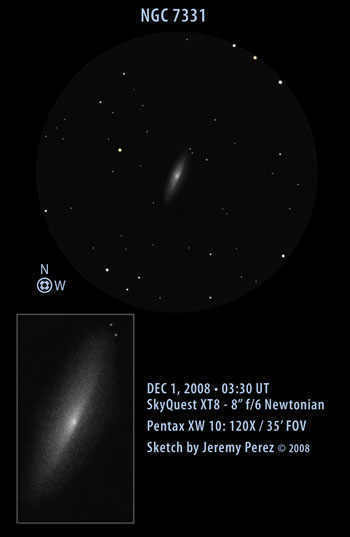 2 Replies to “Dissecting an observation of NGC 7331”