I decided to revisit a variety of older photos recently and try reprocessing them. In particular, I’ve had a really difficult time processing the noise out of my short, 30 second landscape & sky shots. After seeing some amazing sub-minute night photos by David Harvey, I was inspired to give mine another try.

Three years ago, I shot some photos while observing at Anderson Mesa. The reprocessed photos below shows the Hall 1.1 meter Ritchey-Chretien Dome. A bit of the Perkins dome can be seen to the right. The original processed version of that photo was very noisy and it only held up at a smaller size. The stars also had poor differentiation in magnitude and I can’t stand greenish-yellow sky color. This still isn’t a masterpiece, but it’s giving me some ideas for future shots. The shot is a single (unstacked) 30 second exposure at f/3.5, ISO 1600 with my Canon EOS 300D. 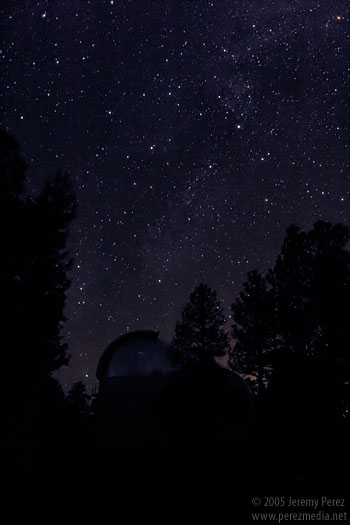