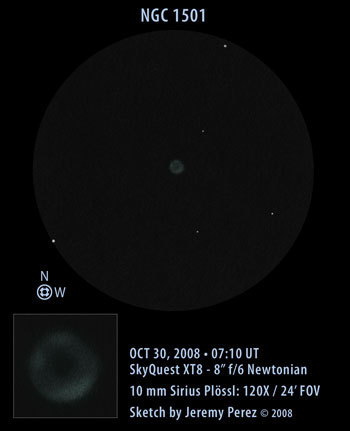 This planetary nebula was a nice detour after traveling along Kemble’s Cascade and the sparkling splash of NGC 1502. It was readily evident as a soft disc at 48X. At 120X, it had a very slight aqua tint. I found it too faint to examine well at 240X, so I kept it to 120X. Averted vision revealed a thick, subtle annular shape. The southwest edge was brighter and the northeast edge seemed to have two brighter knots. The northwest side appeared somewhat flattened. I saw no evidence of a central star.