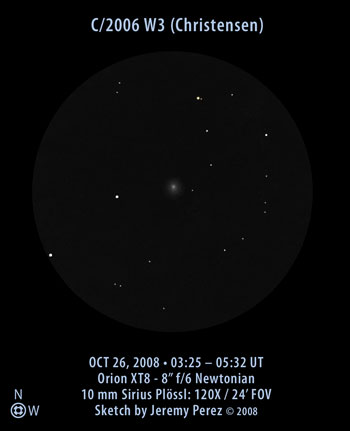 Comet 2006 W3 was discovered on November 18, 2006 by E. J. Christensen with the Catalina Sky Survey. It has been corkscrewing its way along the northern Milky Way since then, heading for a summer 2009 maximum that might bring it up to 8th magnitude.

When I observed it this evening, It was a fairly easy catch in Cepheus. At low power, it appeared as a slightly out of focus star. Averted vision really helped pop the coma into visibility, and it looked much better at higher power (120X). Its brightness profile faded very quickly away from its stellar core. I estimated the visual extent of the coma to be 1 arc minute in diameter. Over the course of 2 hours, I estimated it moved about 3 arc minutes to the southwest at a PA of 230 degrees. Checking Starry Night Pro later revealed a movement of 2.5 arc minutes at 224 degrees PA during that time frame. The Aerith.net site estimates a magnitude of 10.3.

A nice double star marked one end of a line of stars near the comet. There was just a hint of color in the double with a pale yellow primary and dull gray-red secondary. The double appeared to have a PA of about 250 degrees and a separation of 10-15 arc seconds. I didn’t bring out the astrometric eyepiece for this one. Measuring the separation of the two stars in Starry Night Pro yielded a measurement of 248 degrees and 17 arc seconds. I was not able to find the pair listed in the Vizier databases or in SIMBAD. It seems notable enough that it should be listed somewhere. The two stars are listed in the Tycho catalog as TYC 4485-536-1 and TYC 4485-832-1.