The monsoon keeps on trucking. And that means no telescope time over the new moon weekend. But it did mean a mini storm-chase for me today.

Another one of those ‘early season’ troughs yanked loads of moisture up and promised to breathe life into some nice storms. A look at the sky in the early afternoon showed looming darkness to the west, trying to hide behind clusters of low-lying cumulus that were scattered everywhere. The NOAA satellite page showed a couple hefty storms blooming near Williams.

I pulled up some geocache sites on the west of town to coax the kids into going with me, and we hopped on I-40. The clouds looked plump and dark, but not very organized in the immediate vicinity of Parks, AZ. So we tagged a geocache on a quiet, crumbling section of old Route 66 and then grabbed some lunch at the Bellemont truck stop. By the time we were done, things looked really interesting. So we drove west on an access road for a good view, and saw some nice structure building. The storm was heading away from us (west-northwest), heavy rain was falling on its west and southwest flanks and a strong, captivating inflow column was gushing on the northeast side of the cell. If you take the basic mesocyclone model and rotate it 120 degrees counterclockwise, that’s pretty much how this storm was behaving. Which is to say, goofy Arizona monsoon style.

So I set up the camera and tripod and started shooting some photos. 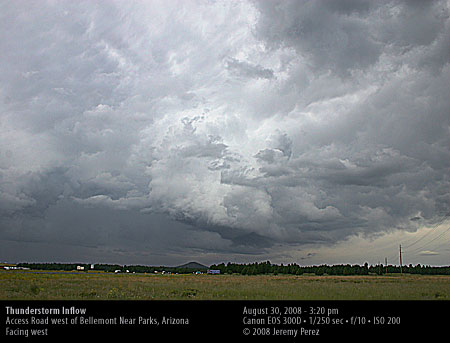 I also got to work on a time-lapse series. After shooting about 25 minutes of frames, it was getting far enough away and looking bland enough that I decided to stop. About two minutes after that, a fantastic bell-shaped skirt of cloud formed right beneath the inflow column and connected to it. It was down to the treeline from our vantage, and was holding steady. I just needed to find a clearer, closer view of it. I’m kicking myself for not shooting a quick photo of it while I had the chance, but I figured I’d just have to drive a little way down the road. That was not so easy. We had to drive about ten miles further west through blinding rain before we found a spot that wasn’t crowded by hills and towering ponderosas.

At the new location just a little west of Williams, I was able to spot the ragged appendage drifting westward. It had lost its skirt, but a beautifully thin and graceful arc of cloud peeled away from it like a calligrapher’s flourish (possibly a tail cloud?). It was dissipating quickly, but you can see some of it in the photo below.

I’ve uploaded the time-lapse to youtube, and the series shows some fascinating motion. The link below will take you to the high-res version of the video. From the first location, the movement starts out fairly haphazard, but by the end of that series it was starting to consolidate its circulation. I wish I had been able to tell that at the time and had kept shooting. At the second location, you can also see some counterclockwise movement as it hurries off to the west.

[Edit September 2, 2008]:
The Arizona Daily Sun published the first photo on the back page today. Being newsprint, it was a bit soft, but it does show up better at their website.