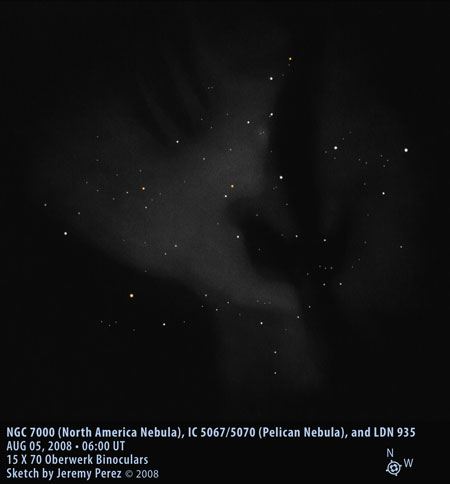 From a dark location with a good pair of binoculars, this rich, starry field is filled with a tapestry of nebulosity. While staying at Flying W Guest Ranch in Oklahoma, I found myself sitting under the stars one clear, dark evening. I had just finished a sketch of The False Comet, and turned my binoculars to the North America Nebula. I spent enough time putting a crick in my neck to appreciate the enjoyable shape from which it gets its name. To work on my sketch however, I needed a more comfortable position. So I attached my Mirror Mount and relaxed for a nice long observation. The mirrored image took some of the spice out of the view, since the North America shape was flipped, but if you’ve seen images of it a million times, that little twist can be a nice way to help keep the observation honest!

After drawing the star field, I got down to the business of finding the contours of the nebula. The Gulf of Mexico appeared to have both a strong, shallow boundary, and a softer, deeper boundary. The Central America leg had the most pronounced edge to it. To the north, within the Canadian section, there appeared to be three very subtle dark fingers, reaching down like glacial valleys. Across the abyss of LDN 935, the Pelican Nebula made a very faint appearance. When added to the glow of NGC 7000, these two nebulae give a saguaro cactus shaped appearance to the dark nebula that divides them. Finally, I noted the orange and yellow-orange embers of four stars burning across the beautiful field. Don’t pass this majestic sight up if you are under a dark sky with binoculars this time of year.

Rather than shade the nebula ‘in the field’, I drew contour lines to note progressively brighter regions of the nebula. I traced and re-mirrored the sketch when I got home and took my time shading it under well-lit conditions, using the contour sketch as a template. I prepared the sketch on a 9″ x 12″ sheet of vellum bristol using a chamois to apply charcoal shading. I used my kneaded eraser to mold the boundaries and keep them true to the contour drawing.

I should also note that I attempted a naked-eye sketch of the Cygnus Milky Way, including the North America Nebula, but was unable to come close to completing it. The complex structure of the Milky Way and this nebula were difficult to tease apart, but I hope to try again and document how this object appears to the naked eye.

Situated three degrees west of the brilliant star Deneb, the North America Nebula (NGC 7000) is a visual test of dark skies. Readily photographed, it can be a challenging visual target unless conditions are dark and clear. It is also quite large, and best seen in whole with wide field instruments, especially binoculars. NGC 7000 is part of a larger nebula complex that includes IC 5067 and IC 5070 which is known as the Pelican Nebula. This emission nebula is bisected by a large dark nebula catalogued as LDN 935. A finger of this dark nebula is responsible for the well-defined ‘Gulf of Mexico’ region. If the star illuminating the emission nebula is Deneb, then the complex would reside about 1800 light years away and span a width of 100 light years.