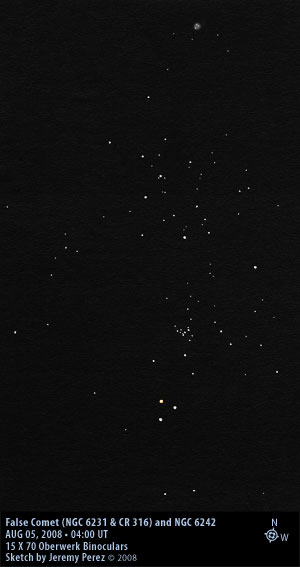 This stunning group of open clusters and brilliant field stars was first pointed out to me a few years ago by Brent Archinal during my first dark sky observing trip at Anderson Mesa. He called it “The False Comet” while circling it with a green laser pointer. To the naked eye, it certainly did look like a swooping comet aimed at the horizon. Through binoculars, it is an incredible visual delight.

I had an opportunity to give this beauty the attention it deserves while on a trip visiting family in Oklahoma. We stayed at the Flying W Guest Ranch a few miles west of Elk City. The small cabin we stayed in was rather unfortunately lit by a nearby mercury vapor light. While it was a nuisance, it wasn’t hard to find cover behind the guest cabin to get a great looking sky. Although I feel I’m spoiled by the dark skies around Flagstaff, the sky in western Oklahoma is excellent. The atmosphere near the horizon is certainly muddier than in Flagstaff and that did affect this observation a bit, but conditions were still very good. I should note that our hosts were more than happy to direct me to an unlit section of their land about a mile and a half up the road where I was given permission to observe under a dark sky to my heart’s content. I preferred to stick close to my family this evening, and it still worked out nicely.

At the False Comet’s head lies a trio of blazing stars consisting of third magnitude Zeta Scorpii and two others of 4th and 5th magnitude. Zeta itself shines a brilliant orange. A half a degree north of this brilliant stellar trio lies a smattering of stars that comprise the open cluster NGC 6231. My sketch shows 12 of the brighter stars. Another degree further north-northeast lies the heart of the wide open cluster Collinder 316. Apparently Collinder 316 intermingles with Trumpler 24, both of which may encompass different portions of the same cluster. I don’t know where it technically begins and ends, but my sketch shows about 35 stars in the area.

Taken together, this entire area is wrapped around a framework of brighter stars that form a twin row of stars that curve gradually to the northeast. It looks as though the bright southern trio of stars are a vessel carving a path through the Milky Way on its way south. In addition to the comet appearance, some observers see a lizard–perhaps a gecko crawling downward across the frosted glass of the Milky Way. While showing the sketch to my son Harrison, he said he saw a baseball player holding a bat: The tip of the bat is NGC 6242, the head and body are Collinder 316, and the legs are the twin rows of stars flowing downward, one of which ends in NGC 6231.

Another degree and a half north of Collinder 316 lies the compact open cluster NGC 6242. Through the binoculars it appeared as a soft spot with three stars emerging from the glow. Both NGC 6231 and 6242 would make great telescopic objects, and hopefully I’ll get to spend time with them soon.

If you live far enough south to see the False Comet, don’t miss an opportunity to appreciate it with binoculars and the naked eye. It truly is a cosmic treasure.

The False Comet moniker was most likely coined by Alan Whitman’s description of it at the 1983 Texas Star Party. He subsequently wrote about it in Sky Publishing’s Total Solar Eclipse 1998 Sourcebook where he described it as “A striking comet-like structure streams north from the colorful naked-eye double Zeta Scorpii. The ‘comet’ consists of Zeta, Hartung’s ‘glorious cluster’ C76 (NGC 6231), the elongated cluster H12, and the background glow of innumerable distant O and B stars of the I Scorpii Association, which contribute to the cometary illusion.”