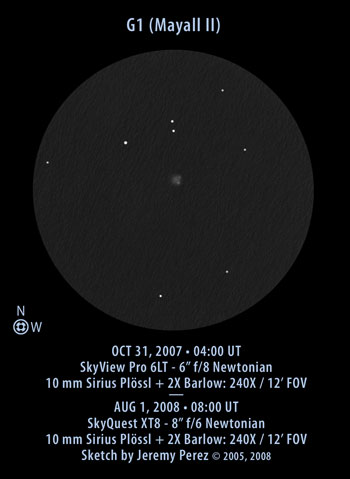 G1, the brightest globular cluster in the local group, is associated with the Andromeda Galaxy nearly 3 million light years away. By itself, it is bright enough to be visible to even modest sized scopes under dark skies. Which is pretty awesome to consider: you could witness light from a globular cluster that orbits another galaxy. There is a problem though. This 13.8 magnitude globular happens to rest within a few arc seconds of a faint pair of 14th and 15th magnitude stars. Together, this trio readily produces a soft, amorphous glow. To confirm a sighting of the globular itself requires that you be able to distinguish the cluster from the other two stars. (I did not come up with this qualification, but it does appear to be the gold standard for accomplished G1 spotters!)

I made a very marginal observation of it in 2005 with my 6 inch Newtonian. That report can be seen further below. I have become increasingly dissatisfied with the results of that observation compared to how clear the sketch made both of the exceedingly intermittent star blips appear. So I finally had an opportunity to try it again. This time with my 8 inch Dobsonian. The 8 inch scope brought in enough light to make the entire field much more readable from my back yard. (The 6 inch required my dark sky location, and lot of effort to just spot the blob surrounding G1.)

I made the observation with a 10 mm plossl and a 2X barlow for a magnification of 240X. I would prefer to have bumped that to 300X or more, but I need another Barlow (or to rig my existing one) in order to do that. Additionally, even at 240X, using the Dobsonian placed the handling of this observation a couple steps below ‘nightmarish’. Repeatedly nudging around such a faint field is a great stress-builder and emphasizes the great need to add some milk carton plastic to the azimuth bearing on my mount.

Over the course of a half hour, I watched the soft, barely condensed mist of light around G1 as it drifted through the field. At odd intervals, the seeing would dial in enough to give me a glimpse of the southern star. It lined up rather nicely with the soft patch of G1 and a brighter star to the northeast. This alignment appeared regularly enough that I feel confident with the visual separation of that star.

Glimpses of the northern involved star were much less forthcoming. However, on several occasions, this portion of the blob of light condensed briefly enough to perceive an alignment between it and the combined light of G1 and the southern star. This alignment pointed northwest at an angle steeper than that formed by the bright single & double-star pair to the north. This sighting is marginal.

I hope that the revised sketch better captures the subtlety of this tight trio of objects. Larger aperture is obviously required to truly ‘appreciate’ this object. However, I don’t think that the rule that both stars must be separated should discourage someone with smaller aperture from attempting to observe the combined glow. The light from G1 is the dominant part of the grouping, and if you see a soft haze there, a large portion of that is radiating from a globular cluster millions of light years away. That’s pretty awesome! 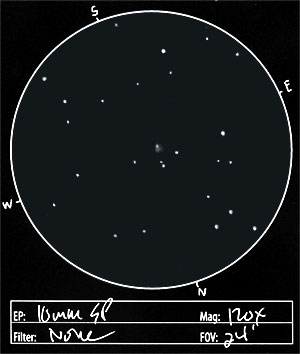 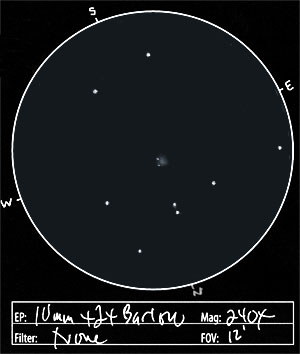 After tracking down the NGC 206 star cloud in M31 this evening, I stepped things up a couple notches to try and catch the globular cluster G1. Once again, spurred onward by Sue French’s article in the December 2005 Sky and Telescope magazine, I followed the excellent finder maps to get to the precise location of this distant object. The cluster rests at the south-southwest tip of a triangular asterism formed by the globular, a single star at the northeast point, and two nicely lined up stars on the north apex. What showed up at G1’s location came across as a soft, nonstellar patch at 120X magnification using my 10 mm plÃ¶ssl. At odd intervals, I got a hint of stellaring in the midst of this haze and indicated that in the 120X sketch. My initial impression was that I was seeing the globular cluster even at this low magnification. But I wasn’t heeding a caution from observers at the Cloudy Nights forums that you really need to look closer to be able to split the cluster from two very closely associated, faint stars (well…faint for a 6″ scope ;).

So I inserted the 2X barlow to bring the magnification up to 240X. At this point, I was working with a seriously faint image, and as wonderfully dark as the sky was at Anderson Mesa, I still had to pull the hood of my jacket over my face and eyepiece, and breathe deeply to try and locate these two stars. I hadn’t carefully studied Sue’s actual sketch in the S&T article ahead of time for fear of prejudicing myself for an averted imagination experience. But I did know those two stars would be close enough to give a Mickey Mouse head appearance to the cluster. Folks, I had already spent 45 minutes on the search and sketches up to this point, but I had to spend another 45 minutes more trying to coax these last 2 stars out. I think I was setting myself up for frustration in a way, because seeing was really very poor for this sort of thing, and stellar glimmers popped up only very very briefly, at aggravatingly lengthy intervals. Over the course of that 45 minutes, one star toward the southern side of the fuzz patch popped up a number of times. But only on 5 occasions over that time span did both stars momentarily flicker into view. They were lined up roughly north-south along the west side of this tantalizing blot of haze. I’ve marked them in the 240X sketch, but that sketch really needs to be animated to show those two naughty stars flickering into view like 1/10 of a second out of every few minutes. I think that may be infrequent enough to call this a questionable observation, but I promise you I’m going for it again if I get a night of less than vengeful seeing at one of my dark sites.

Below are a couple comments from the amastro group on the observation. David and Sue, thanks for permitting me to post these here:

Regarding G1… I was observing that this last week at Eldorado Star Party (Friday night), so it is very fresh in my memory. This was one I have observed before and I was doing a refresher since one of my observing partners threw the gauntlet down on it. I was using my 17.5″ f/5.

You are right in that you need to be able to split those three objects (2 stars and G1) to get the Micky Mouse head with the head being G1. To truly do this you need excellent resolution (from collimation, seeing, aperture, etc.) and magnifcation.

Assuming your conditions for resolution are pristine, you might be able to split the three at some magnifications above 280x or so (I went straight to 333x (6.7 UWA) from 86x (26mm T5) at the point I located it, so I can only guess at magnifications less than that). However, that probably won’t reveal G1 being non-stellar until you lay on some more magnification. I have never been able to clearly see the non stellar nature of G1 under 444x (5mm Radian and/or Nagler, the next step in magnifcation for me in my eyepiece case after 333x). At this magnification, the split is quite obvious and G1 has a slightly bloated hazy appearance with a very tight core that contrasts well against the other two stars. At 444x, the star pattern should include the three other field stars (a visual double and a single star) that complete the triangular points with G1 and its two stellar companions making the third vertex. At 555x (4mm Radian) and above, the nature of G1 is quite obvious.

From your notes, it is obvious that you were in the right place and going after the correct target. I think that some observers (based upon the observation notes I have seen) have mistakenly thought that once they find the triangular arrangement of the double, the single, and G1 and its companions at the other end, they see G1 and the two stars as a blob and think that they have seen a non-stellar object, when in fact, they just hadn’t split G1 and its companions yet. Consequently, they tend to really understate the necessity for magnification to bring these guys out.

I am not sure how capable a 6″ scope would be in such a case (splitting G1 from the other two stars), but it would require perfect seeing at a minimum. It still may be difficult after that to see any non-stellar nature in G1. In any case, you have certainly stepped up to the challenge in what you did. I would try more magnification as a starter in any case.

I don’t find seeing Mayall II (G1) as non-stellar quite as difficult as you. I was looking at it with a 10-inch again a few nights ago under rather poor skies. Once I got up near 300x, G1 was patently non-stellar and the southern star of the pair was easy; however, the northern one was intermittent.

If anyone observing them is not sure which objects he’s got, check their alignment with repect to the triangle they form with the field stars David mentioned below.