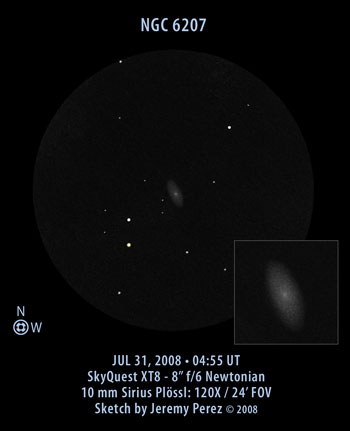 I had never taken the time to look for this galaxy next to M13, but it was visible without much effort through the 8-inch Dob. It shared the view with it’s huge globular cluster neighbor at low power. The 120X view offered the best view, showing the galaxy to be elongated north-northeast to south-southwest at a PA of about 20 degrees (the NGCIC project lists a PA of 15 degrees). It appeared to be about 2 arc minutes long by 1 arc minute wide and sported a what appeared to be a nearly stellar core. This ‘core’ is apparently a superimposed foreground star. To the southeast, a pair of bright stars lit the view, with the brighter southeast star burning yellow-orange.