In preparation for an upcoming article, I made a new observation of this interesting little planetary nebula. I noticed no color in it. The southern lobe was the brightest. Both lobes were brightest at their outer apexes. The bright portion of the northern lobe seemed to have a bit of a hollow along its inner edge. I spent a lot of time glued onto the eyepiece, looking for the lateral extensions that this nebula possesses. As I grew better adapted, and spent time with the view, the east and west sides of the bright, inner dumbbell showed a soft glow. This extended outward nearly the same width as the inner portion of the nebula on each side. The western extension appeared to have a slightly brighter whisp along its northern edge that peeled away from the northern dumbbell lobe. The eastern extension was brighter along its southern side–this brighter area was not as slender as the northwestern streak. In comparison to the main body of the nebula, these extensions were very subtle, and would be easy to miss. If you have a dark, transparent sky, try giving this nebula a long, focused look and see if they show up for you.

M76 is one of the fainter Messier objects. It consists of what is known as the ‘cork’ (visible in my sketch) which is 42×87″, then there are fainter ‘wings’ which are 157x 87″, and then a faint halo tha covers 290″. This outer material was likely ejected during the red giant phase of the central star. It has a large difference between visual magnitude (9.6-10.1) and photographic magnitude (12.2), due to most of the visual light being emitted in the OIII spectral line. Its distance is estimated anywhere from 1700 to 15,000 light years yielding a ‘cork’ dimension anywhere from .34 x .72 to 3.1 x 6.4 light years. This would make the outer halo anywhere from 2.4 to 21 light years across. It was discovered by Pierre Méchain in 1780 and added to Charles Messier’s catalog in the same year. 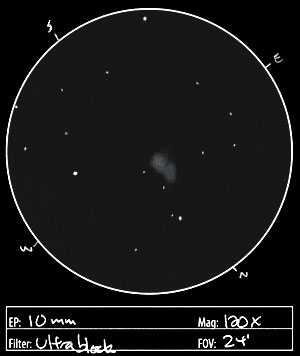 This was a neat little PN. It had a strong two-lobed appearance. It really benefited from the Ultrablock filter (the moon was rising). The lobes aligned north to south, but each lobed seemed stretched northwest to southeast. The southern lobe was the brightest and most condensed. The width looked to be 2′ by 1.5′. I didn’t notice any color.