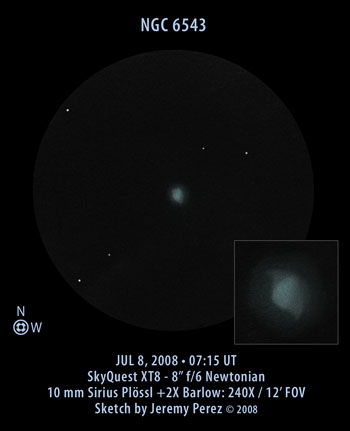 I wasn’t sure how much I would see, but this planetary nebula turned out to be a great visual treat. It bore a noticeable aqua color and was elongated at a position angle of about 30 degrees. The brighter portion of the core was vaguely lumpy, but not concentrated at the center. Its contour was roughly shaped like a parallelogram with slight hints of hooklike shapes at the northeast and southwest ends. The western side also had a subtle rounded extension. A larger, fainter halo appeared to surround it all. I was not able to detect the central star at any magnification. I tried the UltraBlock filter, but contrast was already very good, and it didn’t help in my opinion.

My observation shows only hints of structure from the inner portions of the nebula. I have overlaid a Hubble photograph in the rollover graphic above, and tried to scale it to what appears in my sketch. I did not pick up the outer spindled ends of the nebula, but did notice some of the contours closer to the core. The Hubble image has been beautifully optimized to pick up as much detail as possible, but relative brightness does not compare well to the visual experience. Follow this link to the Misti Mountain Observatory – Astronomy Pages to see a photograph that is somewhere between the visual view, and the Hubble view.

Careful Hubble Space Telescope measurements of the lateral expansion of NGC 6543 compared to doppler measurements along line-of-sight show that the nebula is about 3300 light years away. Based on the measured expansion rate, the age of its bright inner shell is estimated at about 1000 years. The star that generated this nebula likely started at about five solar masses, but has gradually ejected much of that to weigh in at just over one solar mass now. It was discovered by Friedrich Wilhelm Herschel in 1786. NGC 6543 is also cataloged as: PK96+29.1, H IV-37, GC 4373, 7ZW 759